After Hajj: A Continuous Supplication 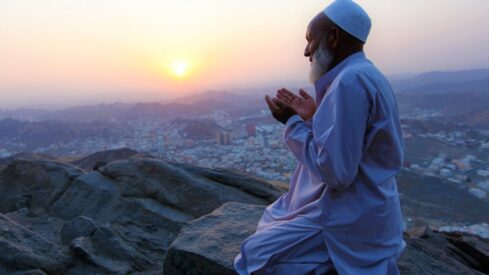 Allah has blessed us with Hajj season, and bestowed His favor upon us with the performance of different acts of worship and obedience to Him. We ask Allah to accept from those who made Hajj this year as well as from all the other Muslims who asked for His forgiveness during the foregoing blessed days.

Among the good deeds we have done during Hajj days and which we should always do is supplication. Supplication is one of the most beneficial types of healing; it is the enemy of illness and affliction — repressing them and treating them, preventing their occurrence, removing them or at least alleviating them. Supplication is the weapon of the believer, as it is reported that the Messenger of Allah (peace and blessings be upon him) said, “Supplication is the weapon of the believer, the pillar of the religion, and the light of the heaven and earth” (Al-Hakim).

Supplication is the sign of worship, and Allah loves that His slaves should supplicate to Him. He says in a hadith qudsi, “O My slaves! You are all astray except him that I guide, so seek for My guidance, I will guide you. O My slaves! You are all hungry except him whom I feed, so seek for provision from Me, I will feed you” (Muslim). Allah tests His slaves with trials that drive them to supplicate to Him, and this is in itself a blessing. Total reliance on Allah is the actual wealth, the essence of worship, and the utmost goal. Allah loves from His servants that they ask Him, turn towards Him, and manifest their destitution and lowliness in front of Him. Allah has made it a duty upon Himself not to send His servants back disappointed and empty-handed, as His Messenger (peace and blessings be upon him) has informed us:

“There is not a Muslim upon the earth that calls to Allah with a supplication except that Allah gives it to him or He removes some evil of equal proportion from him, so long as he doesn’t supplicate for something sinful or to sever family ties.” So a man among the people said, “What if we ask numerous requests?” He (peace and blessings be upon him) said, “Allah is akthar (able to respond to numerous requests)” (At-Tirmidhi).

Supplication is also a characteristic of the prophets and the chosen ones. Allah says [Verily, they used to hasten to do good deeds and they used to call on Us with hope and fear and used to humble themselves before Us] (Al-Anbiya’ 21:90). We should be patient with whatever happens to us, for there is a relief with every difficulty, and we should not stop supplicating. We should always praise our Lord and thank Him for all His mercies. Allah says [Invoke Me, I will respond to your invocation. Verily, those who scorn My worship, they will surely enter Hell in humiliation] (Ghafir 40:60). Also, Abu Hurairah (may Allah be pleased with him) reported that Allah’s Messenger (peace and blessings be upon him) said, “Whoever does not ask from Allah, He becomes angry at him” (Al-Bukhari and Ahmad).

The effects of supplication can never be over-emphasized. Prophets Nuh, Yunus, Ibrahim, Musa, Sulayman and Dawud (peace be upon them all) all invoked their Lord and He answered their invocations. He is the One Who cured Prophet Ayyub (peace and blessings be upon him) of his ailment when he supplicated to Him. Allah gave Muhammad (peace and blessings be upon him) victory over the disbelievers in the Battle of Badr in spite of the numerical inferiority of the Muslim army.

O you oppressed person! When all doors are closed against you, go to Allah, Whose door is never closed against the weak and the oppressed. O fathers! Supplicate for your children, for your invocations for them are accepted.

It is through supplication that one becomes high-minded, contented, and respected. The more one increases in sincerity, the more one’s prayers are answered. One should not be hasty and impatient. If the answer is delayed or slow in coming, one should not become frustrated and give up supplicating. This person is like the one who sows a seed or plants a flower, watering it and tending to it, then when it is delayed in appearing or flowering he leaves it and neglects it. Abu Hurairah (may Allah be pleased with him) reported that the Messenger of Allah (peace and blessings be upon him) said:

“The supplication of the servant will always be answered provided that he does not supplicate for something sinful or supplicate to sever the ties of kinship and provided that he is not impatient.” It was asked, “O Messenger of Allah, what is impatience?” He (peace and blessings be upon him) replied, “He says: ‘I have supplicated and supplicated but I have not received an answer’ then he becomes frustrated and leaves off supplicating” (Muslim).

The servants should combine in their supplication the presence of the heart and its being attentive and devoting solely to Allah. They should have fear and reverence in their heart, beseeching their Lord in a state of humility and submissiveness. They face the qiblah and in a state of purity, they raise their hands to Allah and begin by praising and extolling Him. Then they invoke peace and blessings upon Muhammad, His servant and Messenger (peace and blessings be upon him). They precede mentioning their need by seeking forgiveness from Allah, and then they earnestly and sincerely make their request like one who is needy and impoverished, supplicating to Him out of hope and fear. They seek the means of getting close to Him by mentioning His names and attributes and making the religion sincerely for Him alone.