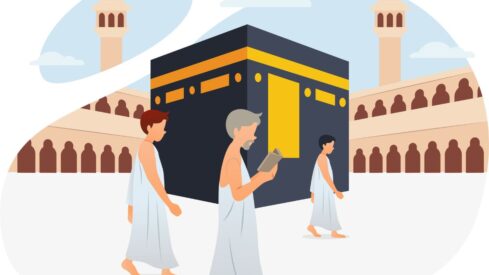 2. Abstaining from travel in the second half of the month or because the moon is positioned in the constellation of the Scorpion.

3. Abstaining from cleaning the house and sweeping it because a traveler is about to leave.

4. Praying two Rak`ahs when leaving for Hajj – reciting in the first Surat al-Kafirun and in the second Surat al-Ikhlas, then after finishing saying : “O Allah I have gone out for You and am heading towards You…” then reciting Ayat al-Kursi and Surat al-Ikhlas, and the Last two Surahs.

6. Reciting by the one intending Hajj the end of Surat Aal `Imran, Ayat ul Kursi, Surat Az-Zalzalah a and Surat al-Fatihah -when leaving the house – claiming that thus all his problems of this world and the next will be solved.

7. Making Dhikr and Takbir loudly upon the leaving or arrival of the pilgrims.

8. Giving Adhan upon departure of the pilgrims.

9. Traveling alone ‘taking only Allah as companion’ as some of the Sufis claim!

10. Traveling without provisions claiming that it is Tawakkul (depending upon Allah)!

11. A man making agreement with a married woman who is about to make Hajj and has no mahram, that he will be for her as a mahram.

12. A woman taking a non-related man as her mahram.

13. The traveler’s praying two Rak`ahs every time he makes a halt and saying “O Allah make my stop a blessed stop and You are the best of hosts.”

14. The traveler’s reciting every time he makes a stop Surat ul-Ikhlas ten times, and Ayat ul-Kursi and the Ayah “WA MA QADAROOLLAHA HAQQA QADRIHI” once.

15. Eating onions from every land which he enters.