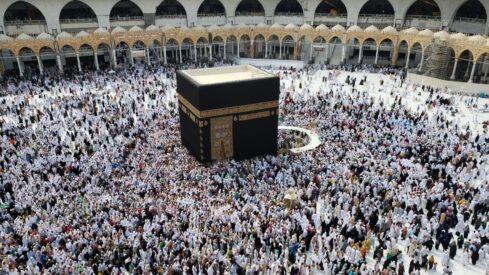 `Eid Al-Adha falls on the 10th day of the 12th month (Dhul Hijjah) of the Islamic calendar. This is the day when the pilgrims gather in Makkah by the millions come, after having completed many of the essential rites of Hajj, out of ihram and out of the restrictions that go with ihram (e.g. the restriction against putting on perfume, cutting nails or cutting beard or other hair).

Ihram (which consists of two unstitched pieces of white cloth for men and any modest dress for women) symbolizes kafan, the white sheet in which the dead are wrapped in preparation of burial. The restrictions associated with ihram further reinforce this symbolism. When a pilgrim wears ihram on or before the 8th of Dhul Hijjah he or she symbolically passes to the OTHER SIDE (of the grave) and when on the 10th of Dhul Hijjah he or she comes out of ihram it is like a return to THIS SIDE. At this point the rest of the Ummah which had stayed behind on THIS SIDE joins the pilgrims through the festivities of `Eid Al-Adha.

This “joining in” is done in two ways. First, through ‘id prayers. Just as the pilgrims have gathered in Makkah for remembering Allah in various ways, so also the rest of the Muslims gather in large numbers in their own cities and remember Allah through special prayers. Second, through sacrificing an animal. Just as many pilgrims (i.e. those that perform Hajj at-Tamattu`, one of three types of Hajj) sacrifice an animal on 10th, 11th or 12th of Dhul Hijjah, so also the Muslims the world over perform sacrifices on one or the other of the same three days. All other rites of Hajj are bound with specific places, e.g. Tawaf with the Ka`bah and Sa`y with the hills of Safa and Marwah. But getting together and remembering Allah through prayers and Takbirs (calling ‘God is greater than anything else) and making sacrificial offerings is not so bound to any place. So the Muslims all over the world “join in” Hajj through these two types of actions.

If id Al-Adha is linked with Hajj in this close way, then its primary significance must lie in the meaning of Hajj, especially the two Hajj rites that pilgrims perform during the three days of `Eid Al-Adha: sacrifice of an animal (Nahr) and stoning of the devils (rami al-jamarat).

Nahr, as we all know, commemorates the exemplary manifestation of obedience and love shown to God by the prophet Ibrahim when he bowed to God’s command and prepared himself to sacrifice the dearest thing he had in his life, his son Isma`il. Such surrender to the will of God and love for Him is expected not just of prophets but of all believers, since all believers are expected to be “Muslims”, meaning those who surrender their wills to God and all believers are expected to “love God most of all” (2:165). Nahr is meant to remind us this stage of Islam and iman (inner conviction), if not to make us strive to reach it.

The second Hajj rite during the days of `Eid Al-Adha is stoning of three pillars that symbolize three devils or three manifestations of the Devil: batil (falsehood), kufr (rejection of God and His signs) and Zulm (oppression). This stoning clearly is meant to remind us of the need of jihad in its various forms against all kinds of forces of evil, jihad that occupied the lives of all the prophets and must occupy the lives of all true believers. This stoning is done again and again on three different days. This is meant to make the point the battle between good and evil is not a one time affair but a perpetual one and the believers need to engage in it throughout their lives with constancy.

It is interesting to note that although stoning of the devils is done on three different days, many of us spent our `Eid Al-Adha without talking or thinking about it even once. Is this a manifestation of the fact that over the centuries we have somehow managed to remove from our consciousness the dynamic part of Islam?

`Eid Al-Adha, like `Eid Al-Fitr is also a time for enjoyment and entertainment. This is not in contradiction to the extremely serious lessons taught to us by Nahr and throwing the pebbles. For, it is quite possible for a person to maintain a very serious outlook on life and engage in very serious struggle and at the same time indulge in a little light-hearted entertainment on the side.