Element of Place Is Dominant in `Eid al Adha 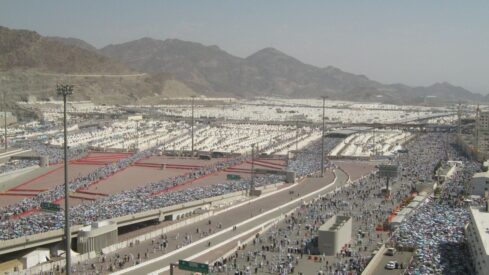 In studying the question of determining the dates of the Eid celebrations, the Fiqh Council of North America considers a number of factors from the Shari‘ah perspective. Chief among these is the concept of unity. Allah Most High said: [This is your Ummah. It is one Ummah; and I am your Lord. So worship Me!] (Al-Muminun 21:92). From this verse the concepts of unity and group worship are clearly shown to be at the core of the religion of Islam. Thus, regardless of how circumstances may change with the passing of time, Muslims must do their utmost to maintain their unity. On the continent of North America, where Muslim unity is closely linked to Muslim identity, this factor is all the more important.

We ask Allah to bestow His mercy on all who stay at home. And we ask all Muslims to heed Allah in respect of the Hajj performed by the hajjis, and to show consideration for the unity of this Ummah, and not to spread dissension. Likewise, we ask Allah to show us the truth as the truth and falsehood as falsehood, and to protect us from all evil.

Allah Most High has replaced the many festivals practiced by the Arabs during the period of ignorance with two Eids for Muslims. Each Eid is linked with an essential act of worship. About the end of fasting, Allah said: [Allah intends every facility for you; He does not want to put you to difficulties. He wants you to complete the prescribed period, and to glorify Him in that He has guided you; and perchance you shall be grateful] (Al-Baqarah 2:185). About the end of Hajj, Allah said: [Then let them complete the rites prescribed for them, perform their vows, and again circumambulate the Ancient House] (Al-Hajj 22:29).

The first of these two verses is considered the legal basis for the Eid al-Fitr. Eid al-Adha, on the other hand, was established as a celebration for completing the rites of Hajj and the move from Arafat. Allah said: [So when you have accomplished your holy rites, celebrate the praises of Allah] (Al-Baqarah 2:200).

The classical jurists determined that the two Eids, Eid al-Fitr and Eid al-Adha, are determined by factors relating to time and place, with the difference that the element of time and place, with the difference that the element of time in the Eid al-Fitr is the dominant element, whereas the element of place is the dominant element in regard to the Eid al-Adha, which is linked to the place of Hajj (the sacred places in Makkah, Mina, Arafat, etc.) In both celebrations there are two kinds of celebrants; those who celebrate their having performed acts of ibadah, and those who celebrate the ibadah performed by others. In the case of the Eid al-Adha, the dominant element is place, and during this Eid those celebrating their own performance of the ibadah are located in the sacred places. Therefore, those Muslims who are not themselves at the sacred places at that particular time are actually sharing in the celebration of this great act of ibadah, and, as such, should follow the lead of those who celebrate it for themselves in the sacred places. Of course, in the past Muslims outside the sacred places had no way of knowing when the celebrations were held in the sacred places, and had to rely on their local calendar. With modern communications, however, this is no longer necessary.

The classical jurists of Islam have held that once the dates for the pilgrimage have been established, they may not be disputed. Some scholars have stated that if someone is certain that he/she has sighted the crescent, and is convinced that the announced dates for the pilgrimage are incorrect, that person may not publicize or announce his sighting and thereby spread dissension among the pilgrims. This is because such behavior will lead to disruption between the hajjis, and to the negation of their Hajj, which is haram.

Among the great scholars of the past to subscribe to this view were Imam Muslim, Ibn Taymayah and Imam An-Nawawi. Some scholars have even stated that the person who announces a correct but contradictory sighting should have his/her hajj negated. Rather, they opine, such a person should remain silent about his/her conviction about the error.

We would like to take this opportunity to remind all Muslims that the Hajj is one of the pillars of Islam, an example of the equality in which Islam holds all humankind, and a symbol of the unity that binds the entire Ummah together as one.