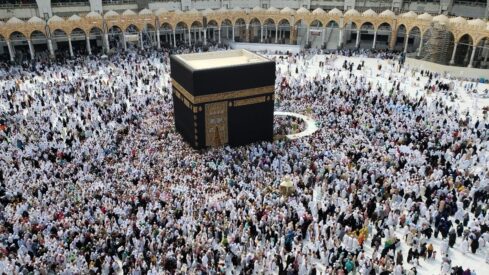 Islam has two major religious celebrations. The first occurs after the completion of Ramadan, the Islamic month during which Muslims fast daily from dawn to sunset as part of an effort towards self-purification and betterment. This celebration is known as `Eid Al-Fitr (Festival of Breaking the Fast).

The second major Islamic celebration takes place during the time of the Hajj, or annual pilgrimage to Makkah (Mecca). This week-long event occurs two months and ten days after Ramadan, during the Islamic month of Dhul-Hijjah, and its culmination is a feast known as `Eid Al-Adha (Festival of Sacrifice). The Hajj consists of several ceremonies meant to symbolize the essential concepts of the Islamic faith and to commemorate the trials of Prophet Abraham (Ibrahim) and his family. Over two million Muslims perform the pilgrimage annually, and the rest of the over one billion Muslims worldwide celebrate the `Eid in conjunction with the Hajj.

Abraham is a figure revered by Muslims, Jews, and Christians alike as a righteous person who lived over four thousand years ago. His story can be found in the Bible as well as the Qur’an. Abraham is considered to be the patriarch of monotheism, belief in the Oneness of God; he sought a personal relationship with his Creator. He left his native city of Ur in Mesopotamia after voicing opposition to his people’s polytheistic practices and eventually settled in Egypt with his family. Later, he escorted one of his wives, Hagar (Hajar), and their infant son Ishmael (Isma`il), to a desolate valley in Arabia and left them there, putting trust in God Who had promised to care of them.

Hagar, overwhelmed with motherly tender care, began searching the surroundings for food and water for her baby. According to the Qur’an, in response to Hagar’s prayers, a spring miraculously gushed forth at Ishmael’s feet to quench their thirst. Hagar climbed nearby hills searching for food and looking for caravans on the horizon. Eventually, some passing traders stopped by in the valley, and asked Hagar’s permission to water their camels. In no time, the surrounding atmosphere captivated the traders and they decided to settle in the little valley; eventually the city of Makkah grew into a large settlement.

Abraham paid regular visits to his family, and when Ishmael was about thirteen years old, he and Ishmael constructed the Ka`bah as a place dedicated to the worship of the One God. Eventually, Makkah became an important trading center by the time of Prophet Muhammad, twenty-five hundred years later.

In commemoration of the trials of Abraham and his family in Makkah, which included Abraham’s willingness to sacrifice his son Ishmael in response to God’s Command, Muslims make a pilgrimage to the sacred city at least once in their lifetime. The Hajj is one of the “five pillars” of Islam, and thus an essential part of Muslims’ faith and practice.

Muslims from all over the world, including the United States, travel to Makkah. Before arriving in the holy city, Muslims assume a state of consecration (ihram), by removing their worldly clothes and donning the humble attire of pilgrims’ two seamless white sheets for men, and simple white dresses and scarves for women. The white garments symbolize human equality and unity before God, since all the pilgrims are dressed similarly. Money and status are no longer a factor for the pilgrims: the equality of each person in the eyes of God becomes paramount.

Upon arriving in Makkah, pilgrims perform what is known as Arrival Tawaf (Tawaf Al-Qudoom) or circumambulation of the Ka`bah. All the while, they chant “Labbayka, Allahumma, labbayk,” which means “Here I am at Your service, O God, Here I am!” The Tawaf is meant to awaken each Muslim’s consciousness that God is the center of their reality and the source of all meaning in life, and that each person’s higher self-identity derives from being part of the community of Muslim believers, known as the Ummah. Pilgrims also perform the Sa`i, which is going seven times between the small hills named Safa and Marwah, re-enacting the Qur’anic story of Hagar’s desperate search for water and food.

Next, on the first official day of Hajj (8 Dhul-Hijjah), the two million pilgrims travel a few miles to the plain of Mina and encamp there. From Mina, pilgrims travel the following morning to the plain of `Arafat where they spend the entire day in earnest supplication and devotion. That evening, the pilgrims move and encamp at Muzdalifah, which is a site between Mina and `Arafat. Muslims stay overnight and offer various prayers there.

Then the pilgrims return to Mina on the 10th and throw seven pebbles at a stone pillar that represents the devil. This symbolizes Abraham’s throwing stones at Satan when the latter tried to dissuade him from sacrificing his son. Then the pilgrims sacrifice a sheep, in reminiscence of the story of Abraham, who, in place of his son, sacrificed a sheep that God had provided as a substitute. The meat from the slaughtered sheep is distributed for consumption to family, friends, and poor and needy people in the community. After the sacrifice, the pilgrims return to Makkah to end the formal rites of Hajj by performing a final Tawaf and Sa`i.

Muslims believe the rites of the Hajj were designed by God and taught through Prophet Muhammad. Muslims believe that since the time of Adam, there have been thousands of prophets, including such well-known figures as Noah, Abraham, Moses, David, and Jesus, and that Muhammad was the final Prophet of God.

The Hajj is designed to develop God-consciousness and a sense of spiritual uplifting. It is also believed to be an opportunity to seek forgiveness of sins accumulated throughout life. Prophet Muhammad said that a person who performs Hajj properly “will return as a newly born baby [free of all sins].” The pilgrimage also enables Muslims from all around the world, of different colors, languages, races, and ethnicities, to come together in a spirit of universal brotherhood and sisterhood to worship the One God together.

Although only the pilgrims in Makkah can participate in the Hajj fully, all the other Muslims in the world join them by celebrating `Eid Al-Adha, or Festival of Sacrifice. On 10 Dhul-Hijjah, Muslims around the world wear their nicest clothes and attend a special Prayer gathering in the morning. This is followed by a short sermon, after which everyone stands up to hug and greet one another. The traditional `Eid greeting is “`Eid Mubarak,” which means “Holiday Blessings.” Next, people visit each other’s homes and partake in festive meals with special dishes, beverages, and desserts. Children receive gifts and sweets on this joyous occasion.

In addition, like the pilgrims in Makkah, those Muslims who can afford to do so offer domestic animals, usually sheep, as a symbol of Abraham’s sacrifice. The meat is distributed to family, friends, and to the poor and needy.