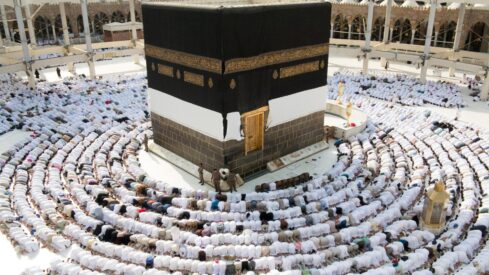 2- Wearing socks or similar footwear in order not to step upon bird excrement and covering one’s hands so as not to touch a woman.

3- Uttering the intention by saying, for example, “I intend to perform Tawaf by making seven rounds (ashawt).”

4- Raising up the hands when touching the Black Stone as they are raised at the beginning of prayer.

6- Standing for a long time while facing the Black Stone, which causes overcrowding and disturbing other people.

8- Saying when touching the Black Stone: (O Allah! Out of belief in You and attesting to Your Book.)

9- Saying when touching the Black Stone: (O Allah! I seek Your refuge from pride and poverty and grade of disgrace in this world and the Hereafter.)

10- Placing the right hand upon the left while making Tawaf.

11- Saying in front of the door of the Ka`bah: (O Allah! The House is Your House and the Sacred Area is Your Sacred Area, and the Safety is Your Safety). Then pointing towards the Station of Ibrahim, peace and blessings be upon him, saying: (And this is the place of the one who seeks Your refuge from the Fire.)

12- Designating special Du`a’s for special places and rituals, such as:

– Making Du`a’ at the `Iraqi corner saying: (O Allah! I seek Your refuge from doubt and shirk, and from hostility and hypocrisy, and had manners, and loss in money and family and children.)

– Making Du`a’ beneath the water-spout saying: (O Allah! Shade me under Your shade on the Day that there is no shade except Your shade.)

– Making Du`a’ while doing Ramal, saying: (O Allah! Make it an accepted Hajj, and forgiven sin, and a praiseworthy Sa`y, and a work that does not lead to nothing, O Mighty One, O Forgiving One.)

– Saying on the last four rounds of Tawaf: (O Allah! Forgive and have mercy and forgive what You know, verily You are the Most Mighty, the Most Generous.)

14- Kissing the two Shami corners and touching them.

15- Wiping the walls of the Ka`bah and the Station of Ibrahim (peace and blessings be upon him).

16- Seeking blessing from what they call ‘Al-`Urwat Al-Wuthqa’ which is a high place jutting out from the wall of the Ka`bah opposite to the Door, the common people claiming that one who touches it with his hand has clung on to ‘the Most Trustworthy Hand-Hold.

17- Seeking to perform Tawaf while it is raining claiming that one who does so has all of his previous sins forgiven.

18- Seeking blessing from the rainwater which descends from the Water-spout of Mercy on the Ka`bah.

19- Tipping what remains of the drink of Zamzam into the Well and saying. (O Allah! I ask You for a plenteous provision, and beneficial knowledge, and a cure from every disease…).

21- Being careful to drench their bears in Zamzam, and also their money and clothes in order to bless them.

22- Drinking Zamzam in many gulps, each time looking up at the Ka`bah as mentioned in some books of Fiqh.