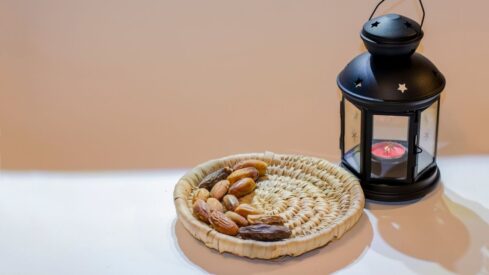 1-Hastening in breaking the fast:

Sulaiman ibn `Amr reported that the Prophet said: “If one of you is fasting, he should break his fast with dates. If dates are not available, then with water, for water is purifying.” (Related by Ahmad and by At-Tirmidhi, who called it Sound and Authentic.)

The preceding hadith also shows that it is preferred to break the fast in the above manner before praying. After the prayer, the person may continue to eat, but if the evening meal is ready, one may begin with that. Anas reported that the Messenger of Allah said: “If the food is already presented, eat before the sunset prayer and do not eat your meals in haste.” (Related by Al-Bukhari and Muslim.)

2-Supplications while breaking the fast and while fasting:

Ibn Majah related from Abdullah ibn Amr ibnul-`Aas that the Prophet, peace and blessings be upon him, said: “A fasting person, upon breaking his fast, has a supplication that will not be rejected. When ‘Abdullah broke his fast he would say: “O Allah, I ask of You, by Your mercy that encompasses everything, to forgive me.”

It is confirmed that the Prophet would say: “The thirst has gone, the glands are wet and, Allah willing, the reward is confirmed.” In Mursal form, it is reported that he would say: “O Allah, for You I have fasted and with Your provisions do I break my fast.”
At-Tirmidhi recorded, with a good chain, that the Prophet said: “Three people will not have their supplications rejected: a fasting person until he breaks his fast, a just ruler, and an oppressed person.”

Fasting is a type of worship that draws one closer to Allah. Allah has prescribed it to purify the soul and to train it in good deeds. The fasting person must be on guard against any act that may cause him to lose the benefits of his fast. Thus, his fast will increase his Allah-consciousness, and Allah says in the Qur’an: “O you who believe, fasting is prescribed for you as it was prescribed for those before you so perchance you may attain Allah-consciousness.”

Fasting is not just refraining from eating and drinking, but it is also refraining from everything else that Allah has forbidden. Abu Hurairah reported that the Prophet said: “Fasting is not [abstaining] from eating and drinking only, but also from vein speech and foul language. If one of you is being cursed or annoyed, he should say: “I am fasting, I am fasting.” (Related by Ibn Khuzaimah, Ibn Hibban, and Al-Hakim. The latter said that it is Authentic according to Muslim’s criterion.)

Abu Hurairah also reported that the Prophet, peace and blessings be upon him, said: “Allah does not need the fast of one who does not abandon false speech or acting according to his false speech.” (Related by the group, except for Muslim.)

4-Being generous and studying the Qur`an:

Being generous and studying the Qur’an is recommended during any time, but it is especially stressed during the month of Ramadan. Al-Bukhari recorded that Ibn `Abbas said: “The Prophet was the most generous of people, but he would be his most generous during Ramadan when he would meet with [the angel] Gabriel. He would meet with him every night and recite the Qur’an. When Gabriel met him, he used to be more generous than a fast wind.”

5-Striving to perform as many acts of worship as possible during the last ten days of Ramadan:

Al-Bukhari and Muslim record from A’ishah that during the last ten days of Ramadan, the Messenger of Allah would wake his wives up during the night and then remain apart from them (that is, being busy in acts of worship). A version in Muslim states: “He would strive [to do acts of worship] during the last ten days of Ramadan more than he would at any other time.” At-Tirmidhi also recorded this from Ali.