Ramadan and the Qur’an 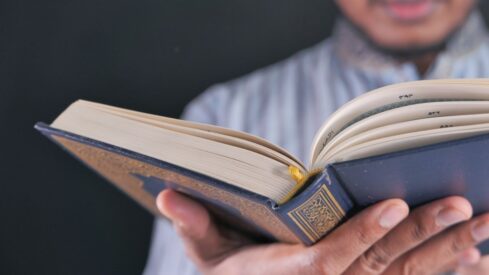 One night during the month of Ramadan, when the Prophet was 40, Almighty Allah ordained that His Light [i.e. the Qur’an] be sent down [on earth]. On that night, Allah revealed the first verses of the noble Qur’an unto His Prophet:

(Recite: In the Name of your Lord Who created, created humans from clots of blood. Recite, and your Lord is the Most Generous.) (Al-`Alaq 96:1-3)

Thus, a communication was established between the heavens and the earth during the Prophet’s lifetime.

But before this incident, the whole text of the Qur’an was sent down from the Preserved Tablet to the House of Glory in the lowest Heaven. This happened in the Night of Decree (Laylat Al-Qadr):

Ibn `Abbas said, “The (whole text of the) Qur’an was sent down to the lowest Heaven at one time, yet it was later revealed piecemeal over 20 years” (An-Nasa’i and Al-Hakim).

Ibn Jarir said, “The (whole text of the) Qur’an was sent down from the Preserved Tablet to the lowest Heaven in the Night of Al-Qadr during the month of Ramadan. Then it was revealed unto Prophet Muhammad in the way Allah willed it to be revealed [i.e. in portions].”

Ibn `Abbas is reported to have said that Allah’s Messenger was the most generous of all people, and he used to reach the peak of generosity in the month of Ramadan when Jibreel (Angel Gabriel) met him. Jibreel used to meet him every night of Ramadan to rehearse the Qur’an with him. The Prophet was the most generous person, even more generous than the strong uncontrollable wind — in readiness and in haste to do charitable deeds (Al-Bukhari and Muslim).

According to Fatimah — one of the Prophet’s daughters — (peace be upon her), Jibreel used to revise the Qur’an with the Prophet once every year, but he did so twice in the year of his death (Al-Bukhari and Muslim).

According to Lata’if Al-Ma`arif (pp.355–354), it is reported in a hadith that this revision of the Qur’an between the Prophet and Jibreel occurred at night. This indicates the recommendation of reciting the Qur’an in Ramadan more during the night when people are less preoccupied with worldly activities, more capable of concentration, and more able to make their hearts and tongues unite in the remembrance of Allah. Almighty Allah says, (Certainly, rising at night has a stronger effect and is more conducive to concentration) (Al-Muzzammil 73:6).

Predecessors and Reciting the Qur’an

The predecessors (may Allah be pleased with them) showed such earnest enthusiasm in reciting the Qur’an during the month of Ramadan that [it may be said that] there was nothing else preoccupying them.

For example, Az-Zuhri used to say upon the coming of Ramadan, “It is only about reciting the Qur’an and feeding the poor.”

Ibn Al-Hakam said, “With the advent of Ramadan, Malik would completely forsake studying Hadith and having sessions with other scholars [so that he can concentrate on reading the Qur’an].”

Abdur-Raziq said, “When Ramadan came, Sufyan Ath-Thawri would give up all acts of (voluntary) worship and devote himself to the recitation of the Qur’an.”

Sufyan said, “It was the habit of Zubaid Al-Yami upon the coming of Ramadan to bring copies of the Qur’an and gather his companions [to study these copies together]” (See Lata’if Al-Ma`arif, pp. 359-360).

Fasting and the Qur’an in Ramadan

Both fasting and recitation of the Qur’an in Ramadan act as intercessors with Almighty Allah for the true believer who observes them. In this respect, the Prophet said,

Ibn Rajab said, “Know that there exists two things during Ramadan to which the believer has to apply self-restraint. These are observing fast during the day and offering Qiyam Al-Layl (Night Vigil Prayer) during the night. Whoever observe these two properly and patiently will get their reward endlessly” (Lata’if Al-Ma`arif, p.360).

The most telling example of Ramadan being the month of the Qur’an is the Tarawih Prayers. Reciting the Qur’an constitutes the most part of these prayers as if the prayer is performed so that people may listen to a modulatory recitation of Allah’s Book. The Prophet used to prolong the recitation of the Qur’an in Ramadan’s Qiyam Al-Layl more than he would do in other months (Lata’if Al-Ma`arif, p.356).

In this regard, it is reported that Hudhaifah, a Companion of the Prophet, said, “One night of Ramadan I went to the Prophet. He stood to offer the Qiyam Al-Layl. He started with the following kind of Takbir: Allahu Akbar dhul malakut wal gabarut wal kibryaa’ wal azhamah (Arabic for “Allah is the Greatest, the Possessor of the Dominion, Power, Glory, and Majesty.”) Then he recited the chapters of Al-Baqarah, An-Nisaa’, and Aal Imran, pondering deeply whenever he recited a verse that emanates fear. Then he bowed down saying, “Exalted be He my Lord, the Greatest” for a duration equal to that of his standing. Then he stood up for an equal duration and said, “Allah listens to whoever praises Him. O our Lord, all praise is due to You.” He then prostrated himself for the same duration too and said, “Exalted be He my Lord, the Most High.” After this, he raised his head and sat back for the same duration saying, “O Allah, forgive me.” He then prostrated again for an equal length of time. Then he stood up to complete a two-rak`ah prayer before Bilal came to inform him that the Fajr Prayer was due” (Ahmad).

Umar (may Allah be pleased with) did commandUbay ibn Kab and Tamim Ad-Dary to lead people in Qiyam Al-Layl during the month of Ramadan. One of them would prolong the recitation during the prayer to the extent that he might recite 200 verses per one rakah. People would even lean on sticks because of their long standing, and they would leave the mosque shortly before dawn.

Moreover, some predecessors used to finish one khatmah of the Qur’an (complete recitation of the Qur’an) every three nights during Qiyam Al-Layl. Other predecessors, such as Qatadah, would do this every seven nights. Others like, Abu Rajaa’ Al-`Utaridy, would do it every 10 nights.

Having learned about such great status of reciting the Qur’an during the month of Ramadan, Muslims should devote themselves to the Qur’an and contemplate its verses. In this regard, I do suggest three methods to be taken:

The First Method. This method concentrates on reciting the Qur’an as much as possible. One may set a schedule for this purpose so that one may finish as many khatmahs as possible during Ramadan and thus receive the great reward and blessings of this.

The Second Method. This method is about meditating and applying the teachings of the Qur’an. Muslims may commence a long-term khatmah with the advent of this blessed month. They may recite a single page or so (preferably a group of verses related in meaning), studying its explanation for the purpose of reflecting upon its meanings and indications and knowing what it commands and what it prohibits. Then they are to abide by its commandments and prohibitions and bring themselves to account if they were to act adversely.

This khatmah may last for a year or so, provided that Muslims adhere to reciting the proposed portion of the Qur’an regularly with contemplation and determination to abide by its instructions. The Companions (May Allah be pleased with them) used to learn no more than 10 verses from the Qur’an until they study their instructions and abide by them.

We have learned a great deal about the virtue of the noble Qur’an and how it is closely linked to the blessed month of Ramadan. Now, you only have to get ready and arm yourself with determination and patience so that you would be able to dedicate yourself to learning and applying the Qur’an during Ramadan, the month of the Qur’an.