Sacrifice on the Way of Allah 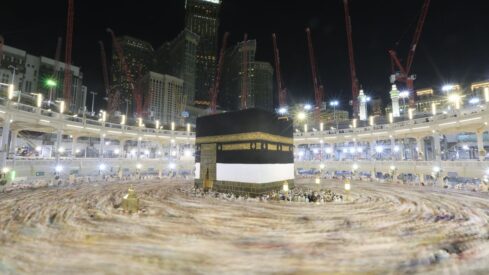 Among the lessons of Hajj is making sacrifice in the way of Allah, for the cause of Islam. As Islam is itself a religion of sacrifice, its different pillars also contain the same features and characteristics. Prophet Ibrahim (peace and blessings be upon him) sacrificed his most loved ones for the sake of Allah. He loved his only son, Ismail (peace and blessings be upon him), more than anything else. Allah Almighty asked him to sacrifice Ismail. Prophet Ibrahim was going to sacrifice his son Isma`il in the way of Allah by His Order:

(Then when (the son) reached (the age of) (serious) work with him, he said: “O my son; I see in vision that I offer thee in sacrifice. Now say what is thy view.” (The son) said: “O my father; do as thou art commanded; thou will find me, if God so wills, one of the patient.” So when they had both submitted their wills (to God), and he flung him down upon his face (for sacrifice), We called out to him, “O Ibrahim; thou hast already fulfilled the vision; thus indeed do We reward those who do right.) (As-Saffat 37:102-105) The Qur’an says (And We ransomed him with a momentous sacrifice.) (As-Saffat 37:107)

The sacrifices made by Prophet Ibrahim and Ismail for the love of Allah left an indelible imprint on the history of mankind. This sacrifice is still remembered and reenacted during Hajj. Prophet Ibrahim left a record of sacrifice to please Allah. In modern times, sacrifice is symbolized by an act of slaughtering a camel or cow or lamb for the sake of Allah during the days of Eid Al-Adha, i.e., starting after the Eid prayer till the sunset on the third day of Eid. Sacrifice is a strongly recommended Sunnah of the Noble Prophet (peace and blessings be upon him) and was introduced in the second year after Hijrah. The purpose of sacrifice is to remind oneself of the great sacrifice of Prophet Ibrahim (peace and blessings be upon him).

The sacrifice of life and wealth in the way of Allah is the zenith of a man’s belief. Allah says: (You shall not attain righteousness unless you give of that which you love; and whatever you give, Allah surely knows it) (Aal `Imran 3:92). This means that when something that has been held so dear is sacrificed in the way of Allah, one may hope to secure Allah’s pleasure. The verse tells us that to attain righteousness one has to sacrifice things, but to attain it in perfection one has to sacrifice things dearer to oneself.

Every sacrifice and effort is to be aimed at seeking Allah’s pleasure. That Allah be pleased with us is the real capital of our lives, and it is for this pleasure that everything should be sacrificed: (Surely my prayers and my service of sacrifice, my life and my death is for Allah alone, the Lord of the worlds) (Al-An`am 6:162).

Hajj is the greatest training and practical demonstration of the spirit of sacrifice in the way of Allah. It shows that Islam does not end with giving some utopian ideals for human life. It is not only a religion, it is the guidance for the whole of mankind to shape their lives around in this world and hereafter. That’s why Allah makes provision for the teaching and training of humankind in every quality through practical implementation.

Muslims were not only taught, but also trained, to make sacrifices and wage jihad in the broader concept of the term: in the way of Allah and for the establishment of justice, peace, and harmony in the world. There is a wrong conception that has been deliberately propagated about jihad. Jihad does not only mean waging war in the path of Allah. The truth is that whatever endeavor can be made at a particular time for the moral and spiritual reform and guidance of mankind is jihad of that age. Jihad is a broad term, which includes struggle for the right cause to be undertaken in the way of Allah. This struggle is not for any personal material end, or to acquire wealth and property, but it is a struggle for winning the pleasure and love of Allah, for the establishment of justice and peace as prescribed by Allah.

Throughout history, Muslims have demonstrated their spirit of sacrifice in the way of Allah. All of the prophets implemented jihad to establish the truth, sometimes leaving behind their home and hearth for the truth and even sacrificing their lives for the cause of truth. In fact, they sacrificed everything which they had.

You will find in the Prophet Muhammad (peace and blessings be upon him) the highest prototype of loyalty, sacrifice, and submission, from the 13 years of tumultuous Makkah life, the return from at-Ta’if, the monotonous Hijrah, the headship of Madinah and the Arabian Peninsula, the day of the conquest of Makkah, to the day of the Farewell Sermon. And in spite of his submissiveness, the force and strength of his (peace and blessings be upon him) pronouncements of Prophet Muhammad can be ascertained from the following verse:

(And who is better in speech than one who invites to Allah and does acts of righteousness and declares; I am surely of those who submit.) (Fussilat 41: 33)

Allah has, in the Qur’an, given the task of religious preaching, reform, and guidance, the name jihad: To devote oneself to the noble task of guiding the ignorant, the wayward, and the thoughtless to the straight path of Islam, and of bringing them nearer to Allah; to spend one’s time and money on it; to sacrifice one’s comfort, all this is jihad in divine estimation.

The pilgrim who has come to Makkah leaving everything behind for the love of Allah should turn into a good da`i, and should have the willingness to sacrifice all his loves for Allah’s sake and to bear patiently all anguish for His sake and accept all losses for His sake.