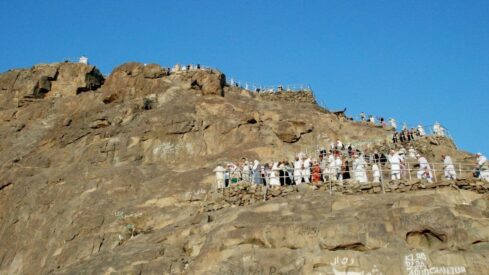 There he is. His face has turned black, he’s pouring dust on his head and crying out for his own destruction. When Satan sees the gathering of the Muslims on the day of `Arafah and the mercy that their Lord sends down upon them, he is bitter, enraged, humiliated. He is described in one of the Prophet’s hadiths as never being seen more humiliated and enraged than on the day of `Arafah, with one exception — the day of the Battle of Badr.

On the Day of `Arafah, Allah’s mercy and forgiveness are showered on His servants. Do you know how great and immense is Allah’s mercy?

Abu Hurairah narrated that the Prophet (peace and blessings be upon him) said, “Allah has divided Mercy into one hundred parts. He kept ninety-nine parts with Him and sent down one part to the earth, and because of that one single part, His creatures are merciful to each other, so that even the mare lifts up its hoof away from its foal, lest it should trample it.” (Al-Bukhari)

If through one part of His mercy Allah guided people to Islam, the Qur’an, salah, and put mercy into their hearts, then how would things be with the 99 parts in the hereafter — the eternal dwelling place and the home of reward?

The mercy of Allah is overwhelming and sins don’t hinder it. To realize this, it is enough to know that Allah ordered His slaves to always seek His mercy regardless of how sinful they have become:

[Say “O My servants who have transgressed against themselves (by sinning), do not despair of the mercy of Allah. Indeed, Allah forgives all sins. Indeed, it is He Who is the Forgiving, the Merciful.](Az-Zumar 39:53)

There is no other day on which forgiveness and mercy reach the level they do on the Day of `Arafah. On `Arafah Allah frees people from Hellfire.

`A’ishah (may Allah be pleased with her) narrated that the Prophet (peace and blessings be upon him) said, “There is no day in which Allah frees greater number of His slaves from the Hellfire than the Day of `Arafah. Allah comes close to His slaves and boasts about them to the angels, then asks (a rhetorical question), ‘What do these slaves seek?'” (Muslim)

Commenting on this hadith Al-Manawi said, “The fact that Allah boasted about His slaves to the angels denotes His forgiveness because Allah would not have boasted in front of the pure and sin-free angels unless the pilgrims had become clear of all sins.”

Bilal (may Allah be pleased with him) narrated that the Prophet (peace and blessings be upon him) said to him in the morning when people gathered (in Muzdalifah), “O Bilal! Tell the people to be silent!” Then he said to them, “Allah blessed you in this gathering and forgave the sinful among you due to the fact that you were amid the pious — and He granted the pious what they asked for.” (Ibn Majah)

Hakim ibn Hizam (may Allah be pleased with him) used to stand in `Arafah bringing one hundred camels and one hundred slaves (he was only obliged to sacrifice one-seventh of a camel). He would then start freeing the slaves for the sake of Allah. The people would then start crying loudly with du`aa’ saying, “O Allah! Your slave freed his slaves, and we are Your slaves, so free us (from the Hellfire).”

Al-Fudhail saw the supplications of people and their weeping on the night of `Arafah and asked the crowds, “If these people went to a man and asked him for a daniq (a very small amount of money), would he refuse?” The people said, “No.” He said, “Allah’s forgiveness is even easier to obtain than that.”

Ibn Al-Mubarak said, “I went to Sufyan Ath-Thawri on the night of `Arafah and he was kneeling down and crying. I asked him, ‘Who is the worst person in this gathering?’ He said, ‘He who thinks Allah will not forgive him.'”

The foregoing are just a few of the many wonderful stories that you hear from this blessed and pure land. Here you will see people supplicate with humbleness, repentance, and regret; they will cry over their sins and shortcomings. Many are those who asked forgiveness and were forgiven, who cried and pledged to refrain from sinning and had their sins wiped out. Many come out of `Arafah sinless with joyful hearts and happy faces.

In this awe-inspiring gathering you see hundreds of thousands shunning this life and sincerely seeking the hereafter. They shed tears trying to gain salvation, supplicating and crying in different languages, yet this never confuses Allah the Exalted, the All-Hearing and the All-Seeing, nor would a question distract Him from concurrently answering other questions.

`Arafah is an introduction to the day of `Eid. It involves standing, supplicating, and repenting. The Tawaf performed on the day of `Eid is called the Tawaf of visiting because, being purified from their sins, pilgrims are permitted on that day to visit Allah’s House. The day of `Arafah purifies the people and prepares them for the day of `Eid.