Striving for a Night of Mercy 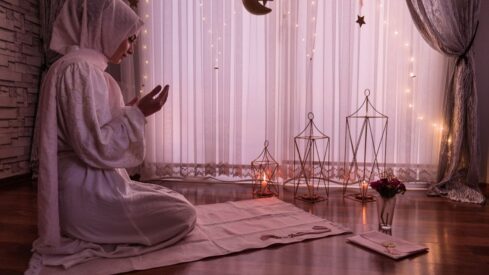 The expression Laylat Al-Qadr actually means “The Night of Power” or “The Night of Decree”. This was the night on which the Qur’an started being revealed (over a time span of 23 years) from God the Almighty to His messenger Muhammad (peace and blessings be upon him). Allah says what means:

What are the virtues of Layla Al-Qadr “The Night of Power”?

*{Verily! We have sent it [the Qur’an] down on the Night of Decree (Laylat Al-Qadr). And what will make you know what the Night of Decree is? The Night of Decree is better than a thousand months. Therein descend the angels and the ruh [Gabriel] by Allah’s Permission with all decrees. Peace… until the break of dawn.}* (Al-Qadr 97:1-7)
Ibn Kathir, a famous scholar who wrote one of the most famous interpretations of Qur’an commented on the phrase: *{Therein descend the angels and the ruh}*:
“This means that the descending of the angels increases during this night, due to the vast amount of its blessings. And, the angels descend along with the descent of blessing and mercy, just as they descend during the time when the Qur’an is recited. They encompass the gatherings in which Allah is remembered and spread their wings for the true seeker of knowledge, showing respect for him.”

This night occurs only in Ramadan, since the Qur’an was revealed in it: *{Verily, We have sent it [the Qur’an] down in the night of al-Qadr.}*This means that its revelation from Allah to His prophet, Muhammad, began during that month.

Abu Hurairah reported that the Prophet (peace and blessings be upon him) said:

“The blessed month has come to you. Allah has made fasting during it obligatory upon you. During it, the gates of Paradise are opened and the gates of Hellfire are locked, and the devils are chained. There is a night [during this month], which is better than a thousand months. Whoever is deprived of its good is really deprived [of something great]. (Ahmad, An-Nasa’i and Al-Bayhaqi.)

So, one who would miss Laylat Al-Qadr, is a very unfortunate person indeed! This is how and why the Night of Power should become so special for worshippers, who strive hard to meet its blessings.

Abu Hurairah reported that the messenger of Allah said:

“Whoever stand in night prayer on Laylat Al-Qadr out of solely his true faith (iman) and seeks the divine reward, then his previous sins are forgiven.” (Al-Bukhari.)

Every sincere believer is eager to stand in prayer during the Night of Power, aspiring the forgiveness of sins, as well as a great reward from Allah; because no one wants to miss a great deal of blessing by missing this night. The hadiths quoted above are evidence for the virtue of the night of Al-Qadr, as well as of performing Qiyam Al-Layl (night vigil prayer) during it. It is also clearly indicated that Allah has honored this night and made it better than a thousand months, which is equivalent to eighty-three years and four months!

For this reason, whoever performs Qiyam Al-Layl (night vigil prayer), with true faith… while seeking reward in it, will be forgiven. So, we should give attention to our participation in the long prayers–whether conducted in mosques or privately at home–during the nights on which Laylat Al-Qadr could fall.

Concerning praying in congregation, the Prophet Muhammad has said:

“Whoever stands in prayer with the imam (the prayer leader) until he (the imam) concludes the prayer, it is recorded for him that he prayed the whole night…” (Abu Dawud, At-Tirmidhi and Ibn Majah)

It is recommended to supplicate a lot during this night, as it was reported by `A’ishah (may Allah be pleased with her), that the Prophet recommended a specific supplication on this night:

This means the following:

“O Allah, You are the One Who pardons greatly, and loves to pardon, so pardon me.”

Also, one form of worship, especially during Ramadan is i`tikaf. The essence of this ritual is to devote oneself to the Almighty by praying, reading the Qur’an, etc. in the mosque for a chosen period of time that can extend from one hour to the last ten days of Ramadan.

It is optional and carries great reward. Muslims can undertake it at any point during the year as a sign of devoting oneself to worship for a set time. It is worth mentioning here that in Islam, monasticism is forbidden.
As for the endeavor of i`tikaf, it is recommended in the noble month of Ramadan, as mentioned. The maximum duration of i`tikaf is from the 19th of Ramadan, at sunset to the sighting of the new moon, whether this occurs on the 29th or the 30th. I`tikaf can also be observed for lesser period, but preferably the length should not be less than one night. Women can also enjoy it, either at the mosques or at home, by confining themselves to a specific space and devoting the time for prayers.