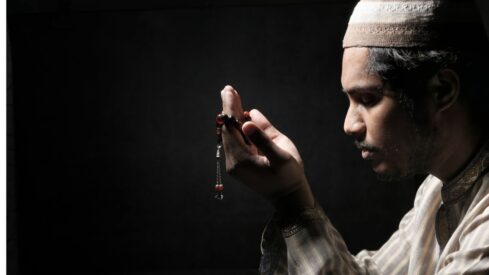 Taqwa (piety) is derived from wiqayah, which means self-defense and avoidance. Sufis define it as protecting oneself from Allah’s punishment by performing His commands and avoiding His prohibitions. Besides its literal and technical meanings, in religious books we find the meanings of piety and fear used interchangeably. In fact, Taqwa (piety) is a comprehensive term denoting a believer’s strict observance of the commandments of the Shari`ah and the Divine laws of nature and life. Such a person seeks refuge in Allah against His punishment, refrains from acts leading to Hell-Fire, and performs acts leading to Paradise. Again, the believer purifies all outer and inner senses so that none of them can associate partners with Allah, and avoids imitating the worldviews and life-styles of unbelievers. In its comprehensive meaning, Taqwa (piety) is the only and greatest standard of one’s nobility and worth: The noblest, most honorable of you in the sight of Allah is the most advanced of you in Taqwa (piety) (Al-Hujurat: 13).

What is the meaning of Taqwa?

The concept—even the actual word—of Taqwa (piety) is unique to the Qur’an and the religious system of Islam. Its comprehensive meaning encompasses the spiritual and material; its roots are established in this world, while its branches, leaves, flowers, and fruits are located in the Hereafter. One cannot understand the Qur’an without considering the meaning or content of the fascinating and wonderful concept of Taqwa (piety), and one cannot be muttaqi (pious) if one does not adhere consciously and continually to the practices and concepts outlined in the Qur’an.
In its very beginning, the Qur’an opens its door to the pious: “This is the Book about and in which there is no doubt, a guidance for the pious” (Al-Baqarah: 2), and calls on people to live in accordance with it so that they may be pious: “O men! Worship your Lord, Who created you and those before you, so that you may be pious” (Al-Baqarah: 21) (and protect yourselves from His punishment)

The most lovable act in Allah’s sight is piety (Taqwa (piety)), His most purified servants are the pious, and His matchless message to them is the Qur’an. In this world, the pious have the Qur’an; in the Hereafter, they enjoy Allah’s vision and pleasure. The pleasure felt in the conscience and spirit is another gift of piety, and in order to recall the importance of piety, the Almighty decrees: Fear Allah and be devoted to Him as He should be feared and devoted to (Al-`Imarn: 101).

What are the benefits of Taqwa?

Piety, which is the conscious performance of good and avoidance of evil, prevents individuals from joining the lowest of the low and causes them to advance on the path of the highest of the high. For this reason, one who attains piety has found the source of all good and blessing. The following is another testimony to this fact:
To whomever Allah has given religion and piety,
He has realized his aims in this world and the next.
Whoever is a soldier of Allah and pious,
He is prosperous and truly guided, not a wretched one.
Whoever has nothing to do with piety,
His existence is but a shame and disgrace.
One lifeless with respect to truth is not truly alive;
Only one who has found a way to Allah is alive.

Piety is an invaluable treasure, the matchless jewel in a priceless treasure of precious stones, a mysterious key to all doors of good, and a mount on the way to Paradise. Its value is so high that, among other life-giving expressions the Qur’an mentions it 150 times, each mention resembling a ray of light penetrating our minds and spirits.

In its limited sense, Taqwa (piety) means sensitivity to the commandments of the Shari`ah and refraining from acts that deprive one of Divine reward and result in Allah’s punishment. The verse: “ And those who shun the worst of sins and indecencies and, when they are wroth, forgive.” (As-Shura: 37) expresses one aspect of this basic religious virtue; the verse: “Those who believe and do good deeds” (Yunus: 9) points to the other. Strict observance of obligatory religious duties and refraining from major sins are the two necessary and complementary foundations of Taqwa (piety). As for minor sins, termed by the Qur’an as Lamam (small offenses), there are many Prophetic declarations, such as: “A believer cannot be truly pious unless he refrains from certain permissible things lest he should commit risky things, that warn people to be careful.”

Perfect sincerity or purity of intention can be attained by avoiding all signs of associating partners with Allah, while perfect piety can be achieved by refraining from all doubtful and risky deeds. According to the Hadith: “The lawful is evident and the forbidden is also evident. Between these two are things which most of the people do not know whether they are lawful or forbidden.” A truly righteous, spiritual life depends on being sensitive to matters about which there is some doubt. The Hadith just mentioned points out that the Law-Giver has clearly explained in broad terms what is allowed and what is forbidden.

However, as many things are not clearly allowed or forbidden, only those who avoid such doubtful things can lead a truly religious life. Using a simile in the continuation of the Hadith, the Prophet, peace and blessings be upon him, said: “It is possible for one who does doubtful things to commit forbidden acts, just as it is possible for the flock of a shepherd pasturing near a field belonging to another or the public to enter that field. Know that each king has a private area under his protection; the private area of Allah is forbidden things. Also know that there is a part of flesh in the body. If it is healthy, the body will become healthy; if it is ailing, the body will be ailing. That part is the heart.” (Reported by An-Nawawi)

In light of this basic foundation for a healthy spiritual life, perfect piety can be obtained by avoiding doubtful things and minor sins. In order to do this, however, one must know what is lawful and what is forbidden, and have a certain knowledge of Allah. We can find the combination of piety and knowledge in these two verses: “The noblest, most honorable of you in the sight of Allah is the most advanced of you in Taqwa (piety)” (Al-Hujurat: 13), and: “Only the learned among His servants fear and revere Allah.” (Fatir: 28). Piety brings honor and nobility, and knowledge leads one to fear and revere Allah. Individuals who combine piety and knowledge in their hearts are mentioned in the Qur’an as those who succeed in the test of piety: “They are those whose hearts Allah has tested for piety.” (Al-Hujurat: 3).

How can a Muslim increase his taqwa?

In the context of worship and obedience, piety means purity of heart, spiritual profundity, and sincerity. In the context of refraining from what is unlawful, piety means being determined not to commit sins and to avoid doubtful things. The following may help in this regard:
1-Be alert to whatever may divert you from Allah.
2-Be alert to the carnal pleasures that may lead to the realm of the forbidden.

3-Ascribe all material and spiritual accomplishments to Allah.

4-Never consider yourself as higher and better than anyone else.

5-Long for Allah’s pleasure and satisfaction in all affairs.

6-Renew the fountains of your Iman by studying and reflecting on Allah’s creation.

7-Remember death, and live with the conscious knowledge that it may happen at any time.

In conclusion, Taqwa (piety) is the heavenly water of life, and a Muttaqi (pious) is the fortunate one who has found it. Only a few individuals have achieved the blessing of this attainment.”