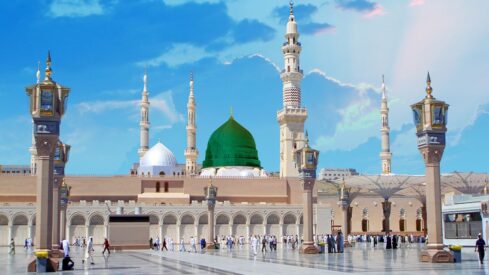 Visiting Madinah is not a rite of Hajj or `Umrah, but the unique merits of the Prophet’s city and his mosque attract every pilgrim to visit it. Muslims’ hearts are always drawn to the city that witnessed the construction of the edifice of Islam and from which the shining rays of the message spread. Muslims are always eager to visit the city they have cherished for long and to pray in the mosque established by their beloved Prophet. Such a visit revives the Muslims’ faith and devotion and reminds them of the great sacrifices and tireless endeavor of the Prophet (peace and blessings be upon him) and his Companions to deliver to us the invaluable gift of Islam.

Because visiting Madinah is not part of Hajj, you may choose whether you will visit Madinah, and if so, whether before or after the Hajj or `Umrah. There is no ihram or Talbiyah for the visit to Madinah or the Prophet’s Mosque.

Madinah is the city that accommodated the Prophet (peace and blessings be upon him) and his Companions when they migrated from Makkah. At the time, the Muslim residents of Madinah, known as theAnsar (the Helpers), showed unbelievable generosity and solidarity with the Muhajirun (the Immigrants). Together, the Muhajirun and the Ansar struggled to uphold the cause of Islam and to convey its message to all corners of the globe.

The Prophet (peace and blessings be upon him) highlighted the merits of Madinah:

It (Madinah) expels the (bad) persons from it, as fire expels the impurities of iron. (Al-Bukhari)

And he supplicated Allah on its behalf:

O Allah! Bestow on Madinah twice the blessings You bestowed on Makkah.‏ (Al-Bukhari)

Anas (may Allah be pleased with him) related that whenever the Prophet returned from a journey and observed the walls of Madinah, he would make his mount go fast because of his love for Madinah.‏ (Al-Bukhari)

Merits of Visiting the Prophet’s Mosque

One prayer in my mosque is better than one thousand prayers in any other mosque excepting Al-Masjid Al-Haram (of Makkah).

Imagine! One prayer earns you a reward better than making a thousand prayers. So you should seize the opportunity of being in Madinah and pray as many prayers in the Prophet’s Mosque as possible.

Moreover, the mosque has a very special place; a garden from Paradise (Ar-Rawdah). The Prophet (peace and blessings be upon him) said,

The space between my house and my pulpit is a garden of the gardens of Paradise. (Al-Bukhari)

When entering the mosque, start with your right foot. Say the du`aa’ of entering mosques:

I seek refuge with Allah the Supreme, I seek refuge with His honored face, with His everlasting authority, from the cursed Devil. In the name of Allah. O Allah, bless Muhammad! O Allah! Forgive my sins and open Your doors of mercy for me.

Then pray two rak`ahs as a greeting for the mosque before you sit down. After that you may go to visit the beloved Prophet and His two Companions Abu Bakr and `Umar.

Face the Prophet’s grave and greet him saying:

I testify that there is no true god but Allah, and that you are Allah’s servant and messenger.

I testify that you conveyed the message, fulfilled the mission, advised the Ummah, and made the due struggle in the cause of Allah.

Peace be upon you, Abu Bakr. May Allah give you the best of reward.

Move another two steps to the right to greet `Umar ibn Al-Khattab (may Allah be pleased with him) saying:

Peace be upon you, `Umar. May Allah give you the best of reward.

After that, move to another place, face the qiblah, and supplicate Allah Almighty for yourself, your family, and the whole Ummah.

Some people try to touch the walls of the Prophet’s grave in pursuit of blessings. Others throw into the room papers on which they have written requests of the Prophet, or they ask him to bless and heal them. All these practices are unacceptable innovations. It is Allah Almighty alone Who is to be supplicated and asked for cure and blessings.

Visiting cemeteries is an efficient means to soften your heart and to remember the inevitable fate that awaits each and every person. Such visits remind you of the next life and prompt you to prepare for the life to come. The Prophet (peace and blessings be upon him) said, “Visit the graves, for that makes you mindful of death” (Muslim).

Baqi` is the cemetery of Madinah. It is the place where most of the Prophet’s wives and a great number of his Companions were buried. Visiting Baqi` is a good chance to recollect the stories of sacrifice and tireless effort done by those great men and women in defense of Islam.

When you visit Baqi`, say the du`aa’ taught by the Prophet:

Peace be upon you, inmates of the abodes of the believers and the Muslims, and Allah willing, we will follow you. I pray to Allah for well-being for ourselves and for you.

This mosque was built when the Prophet (peace and blessings be upon him) approached Madinah in his migration from Makkah.

The Prophet used to go to the mosque of Qibaa’ every Saturday and pray in it (Al-Bukhari). He promised a special reward for praying in it:

Whoever cleans himself in his house and goes to the Qibaa’ Mosque and prays in it a prayer will be given the reward of performing `Umrah.

The area beside Mount Uhud witnessed the second important battle between Muslims and the polytheists known as the Battle of Uhud. In this battle, 70 of the Prophet’s Companions were martyred and the Prophet himself was severely injured. Among the martyrs was Hamza ibn Abdul-Muttalib, the Prophet’s uncle and one of the Muslim veterans, hailed by the Prophet as the master of martyrs. Visiting Mount Uhud and greeting its martyrs is a reminder of these great sacrifices.

When you reach the martyrs’ graveyard, say the above du`aa’ of visiting the graves. You may also supplicate Allah to grant them mercy and forgiveness and to be pleased with them.