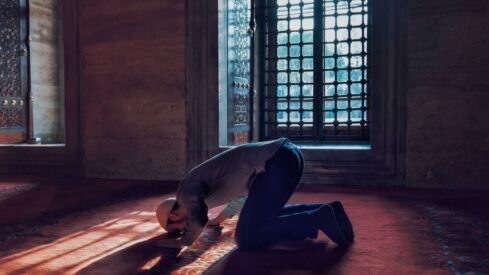 Qiyam is an Arabic term for standing. Qiyam al Layl literally means standing during the night. The prayer of the night has been a practice of the wise and the pious since the advent of Islam. Our Prophet (peace and blessings be upon him) would frequently wake up for Qiyam al layl throughout his prophethood and encouraged his companions to do the same. The Qur’an speaks of Qiyam in  numerous places some which I would love to mention here:

“And during the night wake up and pray, as an extra offering of your own, so that your Lord may raise you to a [highly] praised status.” (17:79)

“You [Prophet], enfolded in your cloak! Stay up throughout the night, all but a small part of it, half, or a little less, or a little more; recite the Qur’an slowly and distinctly: We shall send a momentous message down to you. Night prayer makes a deeper impression and sharpens words” (73:1-6)

The Prophet (peace and blessings be upon him) discussed the merits of Qiyam in his ahadith numerous times mentioning the reward and weight of the deed as a source of encouragement for everyone.

It was narrated from Abu Bishr Ja’far bin Abi Wahshiyyah that: He heard Humaid bin ‘Abdur-Rahman say: “The Messenger of Allah (ﷺ) said: ‘The best prayer after the obligatory (fard) prayers is prayer at night and the best fasting after the month of Ramadan is Al-Muharram.'” Shu’bah bin Al-Hajjaj narrated it in Mursal form. ( Sunan an-Nasa’i 1614)

It was narrated that ‘Amr ibn Murrah al-Juhani said: A man came to the Messenger of Allah (peace and blessings of Allah be upon him) from Qadaa’ah and said to him: “O Messenger of Allah, what do you think if I bear witness that there is no god except Allah and that you are His Messenger, and I pray the five daily prayers, and fast the month (of Ramadan), and pray qiyam in Ramadan, and pay zakah?”  The Prophet (peace and blessings of Allaah be upon him) said: “Whoever dies doing that will be one of the siddeeqs and martyrs.”

Given how important the qiyam is, I would like to take this opportunity to mention 5 ways one can help build the habit of Qiyam.

1. Educate yourself about the Qiyam

Praying the Qiyam is so beloved to Allah Almighty that the Prophet (peace and blessings be upon him) has addressed it’s virtue in the following hadith:

The beauty of the Qiyam is such that the Lord loves forgiving His creation that addresses Him during the last part of the night. It’s only right that one educates him/herself about the Qiyam. Learning about the Qiyam will instil the motivation to carry out the deed even if it means getting up and leaving your cosy bed every night.

Having knowledge of the merit of qiyam in the sight of the Lord will help one gather the energy to carry it out. With as little as two rak’ah, the Qiyam has the power to change one’s destiny. You can find multiple authentic sources providing quality education on Qiyam through the internet for your convenience. Let the knowledge of Qiyam be your first stepping stone towards your goal of making it a part of your daily life!

I always emphasise on the importance of making the right intention before starting a particular task in Islam. Allah the Exalted judges His creation based on their intentions and not the outcomes or results. We need to understand that while our fellow peers/teachers/parents assess us according to the result we show, Allah Almighty judges man in a completely different manner. Always remember success and failure are purely in the hands of the Almighty. He sees but the intention behind each and every action of ours and blesses us accordingly. The foundation of Islam lies upon intention!

‘Umar bin Al-Khattab (May Allah be pleased with him), reported:

The best way to incorporate any habit into your daily routine is to start it gradually so you do not overwhelm yourself. The same rule applies to implementing the Qiyam prayer. It is crucial to start with the minimum number of rak’ahs (which are 2) and then slowly progress to as many as you would like to perform. However it is also important to keep in mind a realistic number of Qiyam prayer rak’ahs to perform, so you do not experience burn out which could eventually lead to leaving the habit of the Qiyam altogether. Narrated `Abdullah bin `Amr bin Al-`As:

Allah’s Messenger (ﷺ) said to me, “O `Abdullah! Do not be like so and so who used to pray at night and then stopped the night prayer.” [Bukhari]

This way you can also avoid thinking of Qiyam as a burden and genuinely start experiencing the joy and peace the Qiyam prayer slowly brings into your life. Soon you find yourself prolonging the Qiyam prayer. There is no limitation on the number of rak’ahs one can pray in the Qiyam but it was the Sunnah of Allah’s Messenger (peace and blessings be upon him)to pray 8 every night.

Allah the Exalted loves good deeds which are consistent regardless of whether they are big or small. The Messenger of Allah (ﷺ) said that “Do good deeds properly, sincerely and moderately and know that your deeds will not make you enter Paradise, and that the most beloved deed to Allah is the most regular and constant even if it were little.” (Al-Bukhari)

So performing Qiyam consistently will be dearer to Allah the Exalted and heavier on the scales compared to a longer Qiyam that you are unable to maintain.

While Qiyam is performed during the night, it does not mean that you should cut down on your sleep which could leave you sluggish the next day. Taking an hour-long nap in the afternoon to make up for the amount of sleep you will be sacrificing for Qiyam would be the ideal situation to maintain your productivity throughout the day without making you feel sluggish the next morning.

It is also the Sunnah of the Messenger of Allah (peace and blessings be upon him) to take a nap before Duhr called the Qailullah. It is a rest taken with or without sleep when the Sun is at its peak and it will count as even more of a reward if you intend to nap so you can perform the Qiyam prayer at night.

5. Strive against your desires

Sleep is one of the biggest pleasures and comforts of this life. Like how too little sleep can affect a person negatively, too much sleep does the same thing by making us lazy and unproductive. Waking up from a deep slumber for the Qiyam prayer will help you to better control your desires and self-discipline yourself into not giving into your whims and wishes. It will also take you out of your comfort zone and strive you to attain your highest productive potential.

This will not only strengthen your resolve for committing to good deeds but also help you reach a favourable outcome in this worldly life as every successful person leaves their comfort zone to strive against themselves to reach their goals. Allah the Exalted says in the Holy Quran:

“But We shall be sure to guide to Our ways those who strive hard for Our cause: God is with those who do good.” [Quran 29:69]

The Road to Success

Qiyam is one of the Nafil prayers performed at night. But it is not limited to just praying; reciting the Quran and Dhikr is also included in this act of worship.

Praying at night when the rest of the world is asleep is the best way to show one’s devotion and love for their Creator.

Allah’s Messenger (peace and blessings be upon him) said: “The most excellent prayer after that which is obligatory is the (voluntary) late night prayer.” [Muslim]

You can also think of performing the Qiyam as Allah the Exalted calling you because He wants you to call upon Him in order to bless you. Verily He is not in need of our worship but we are in need of worshipping Him.