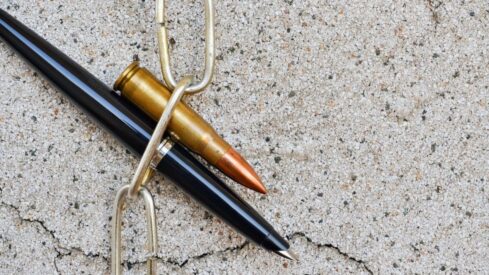 The ability to speak and communicate is regarded in the Qur’an as one of the greatest blessings that God has given humanity. In the Qur’an, God details how He created humanity and then taught humans the power of expression or speech and understanding. The complexity and range of communication possibilities distinguishes humans from other living creatures.

The power of speech and expression is both used effectively and at the same time one of the most abused blessings. The Qur’an addresses this issue by emphasizing each individual’s responsibility for their own deeds. One of the major responsibilities is that of the word. The Qur’an contrasts between responsible and irresponsible use of the blessing of speech.

[Seest thou not how Allah coineth a similitude: A goodly saying, as a goodly tree, its root set firm, its branches reaching into heaven,

Giving its fruit at every season by permission of its Lord? Allah coineth the similitudes for mankind in order that they may reflect.

And the similitude of a bad saying is as a bad tree, uprooted from upon the earth, possessing no stability.] (Ibrahim 14:24-26)

This contrast highlights that the crux of the problem lies not in the power of speech itself or the ability to produce words or communicate messages, but rather, it lies in the use or abuse of this ability according to the responsibility God has assigned along with it.

The Qur’an outlines a number of recommendations on how to prevent the abuse of speech. Many verses point out that one should avoid vain and idle talk, with an emphasis on the importance of weighing words carefully. Muslims are encouraged to either say something useful and constructive or keep their silence.

In describing the characteristics of true believers, God mentions in the Qur’an that they avoid meaningless speech:

[And (the believers are) those who shun vain conversation.] (Al-Mu’minun 23:3)

In another verse, the Qur’an outlines the proper response believers should have towards those who do indulge in abusive speech:

[And those (worshipers of the Merciful are those) who will not witness vanity, but when they pass near senseless play, pass by with dignity.] (Al-Furqan 25:72)

The Prophet Muhammad (peace be upon him), reiterated this same principle. In a hadith, the Prophet said, “He who believes in God and in the Day of Judgment should say good things or keep quiet” (Bukhari).

It follows that there are no restrictions with regards to speech as long as there is a good purpose and intention behind it. There are many verses in the Qur’an which highlight the kind of speech that is recommended.

This highlights one of the qualities of good speech: fairness.

In another verse, God says what means:

[O ye who believe! Guard your duty to Allah, and speak words straight to the point and true] (Al-Ahzab 33:70)

In another saying, the Prophet points out that “A goodly word is a charity.” So charity in Islam is not just money, and the very least that people can give in charity is a good word.

Slips of the Tongue

The gravity of the responsibility of the word is such that the Qur’an warns against using speech to provoke enmity and conflict. This irresponsible use of words is so abhorrent that the Qur’an attributes it to the speech of the ultimate evil: Satan.

[Say (O Muhammad) to My servants that they should (only) say those things that are best and decent: for Satan tries to sow discord and enmity among them: For Satan is to man an avowed enemy.] (Al-Israa’ 17:53)

The danger of the abuse of the faculty of speech, therefore, is directly related to the doings of Satan.

Slips of the tongue can have dire consequences, and the cost of such slips can be serious in both this world and the next.

Courtesy Applies to All People

In Islam, courtesy of the word is not only prescribed to Muslims with regards to other Muslims. It applies for all people, as the Qur’an points out:

[And dispute ye not with the People of the Book, except with means better (than mere disputation), unless it be with those of them who inflict wrong (and injury): but say, “We believe in the revelation which has come down to us and in that which came down to you; Our Allah and your Allah is one; and it is to Him we bow (in Islam).] (Al-`Ankabut 29:46)

Therefore, Muslims should be courteous in their speech towards all people of all religions or philosophies.