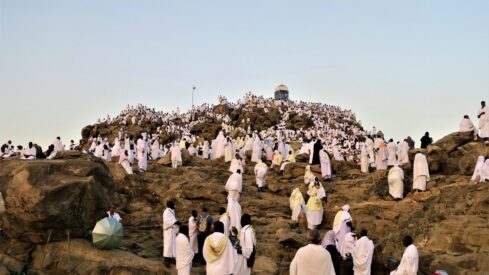 There is no doubt that the rituals of Hajj are limited in number, well known to many of the pilgrims, and so desirable that all pilgrims are keen on performing them as perfectly as possible, without any single fault or blemish, seeking the pleasure, forgiveness, and mercy of Almighty Allah.

This is undoubtedly much more difficult than the performance of the rituals of Hajj itself. Such a challenge lies in the fact that Islam does not want a Muslim’s relation with the meanings and values of Hajj to end once the uniform of ihram has been taken off. Rather, Muslims should maintain the meanings and moral values of Hajj throughout the rest of their lives, and this is the eternal, everlasting Hajj, through which Muslims take off the clothing of ihram yet move from an apparent, external state of ritual devotion to an inner, spiritual one, which is indeed the real state of ihram.

Once pilgrims put on the clothing of ihram, they abstain from many worldly aspects of life; they pay more attention to their manners, they lower their gaze, give up backbiting and gossiping, and control their desires and habits. Thus they become completely different persons who try hard to spare themselves the evils of their own selves and the vices of their materialistic hearts, which negatively affect manners, deeds, and improvement.

Have the pilgrims continued to observe the previously mentioned morals and values after taking off the clothing of ihram?

Have the pilgrims entered a state of moral ihram in terms of behavior and manners?

Have the pilgrims entered a state of ihram heart and soul?

If so, then they are surely on the right track, for they have been able to move from the external Hajj to the internal one — really becoming lifelong performers of Hajj. If not, then they have to reconsider the above questions until they feel that the great journey of Hajj has begun to bear its desired fruits and they begin to venerate such a great religious obligation and hold it in proper esteem.

In order to answer the abovementioned difficult questions, pilgrims have to observe the following after performing Hajj:

1. Pilgrims should be mindful of Allah, heart and soul, even concerning worldly deeds, so that all deeds are dedicated to the pleasure of Almighty Allah. This is because pilgrims who are mindful of Allah during ihram should be the same after they perform Hajj.

2. Pilgrims should keep on praising and thanking Allah, seeking His assistance to achieve spiritual improvement, and remain in good relations with Him, the Almighty.

3. Pilgrims should realize that Almighty Allah is watching at all times, as if they are still in the clothing of ihram. In this way, they do not return to sinful ways after Hajj. Pious, true Muslims never think of how insignificant the sin is, but how great the One being disobeyed is!

4. Pilgrims should fear Allah and be mindful of Him after performing Hajj through being good to their relatives, implanting love, mercifulness, affinity, and sense of responsibility in their hearts, for the pilgrims will be questioned by Allah about them all.

5. Pilgrims should work well after performing Hajj and coming back to their worldly lives, for the Messenger of Allah (peace and blessings be upon him) said, “Allah likes that when anyone of you does something (or work) he does it well.”

6. Pilgrims should be good to their neighbors, colleagues, friends, and everyone so that they all realize that performing Hajj has had a great, positive effect on the pilgrims’ manners, behaviors, and attitudes.

8. Pilgrims should observe the rights and etiquettes related to streets and adopt the civilized Islamic values regarding them.

9. Pilgrims should show high moral standards, patience, gentleness, and leniency toward friends, colleagues, and acquaintances, for the Messenger of Allah (peace and blessings be upon him) said, “The believer who associates with people and forbears their wrongdoing is better than the believer who neither associates with people nor forbears their wrongdoing” (Ahmad).

Dear pilgrim, while performing Hajj or `Umrah, you were mindful of Almighty Allah as regards all your deeds and actions, so do not deprive yourself of the reward of venerating Almighty Allah for the rest of your life. Bear in mind that if you succeed “to worship Allah as if you can see Him, for even though you cannot see Him, He sees you,” as the Prophet (peace and blessings be upon him) said, then you have perfected your faith. Thus your performance of Hajj becomes an everlasting one that shows in every act of obedience you perform. Seeking the pleasure and nearness of Almighty Allah, you will become a performer of lifelong Hajj, Allah willing.