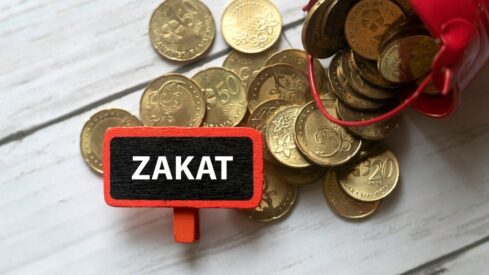 The Prophet Muhammad (peace and blessings be upon him) said, “Islam is based on five (principles): to testify that there is no deity but Allah and that Muhammad is Allah’s Messenger; to offer the compulsory Prayers (salah) dutifully and perfectly; to pay zakah (obligatory charity); to perform Hajj (pilgrimage to the Ka`bah in Makkah); to observe fast during the month of Ramadan.” (Reported by Al-Bukhari)

The Muslim individual is required to pay zakah as an expression of obedience to Allah. It goes hand in hand with salah (ritual Prayers); one is the bodily expression of submission to the Creator, the other is the financial expression of the same. Therefore, zakah is obligatory for Muslims.

In the Qur’an, Allah says what means:

[Take alms of their wealth, wherewith thou mayst purify them and mayst make them grow, and pray for them. Lo! thy prayer is an assuagement for them. Allah is Nearer, Knower.] (At-Tawbah 9:103)

A man once came to the Prophet Muhammad while he was sitting with his Companions and said, “I ask you by your Lord and the Lord of those who were before you, has Allah ordered you to take zakah from our rich people and distribute it among our poor people?”  The Prophet replied, “By Allah, yes.” (Reported by Al-Bukhari)

In addition to helping the poor, the system of zakah also encourages Muslims to invest and use their wealth. The second caliph, `Umar ibn Al-Khattab, advised the Muslims, “Trade with the property of orphans before it will be eaten away by zakah.” (Reported by Malik)

What are the two types of Zakah?

Zakat al-fitr (zakah of breaking the fast) is a fixed amount that has to be paid—by rich and poor alike—by the head of the household for every member of his or her family before the `Eid Prayers at the end of Ramadan. Zakat al-mal (zakah of wealth), on the other hand, can be paid anytime and each individual is responsible to pay his or her own zakah. The amount of zakah is variable according to the person’s wealth.
Islam considers the woman as an independent legal entity with rights and duties of her own. Therefore, every Muslim—man or woman, child or adult—whose wealth exceeds the nisab (the minimum zakatable amount) and who has had this amount for a whole lunar year must pay zakat al-mal.

When to Pay Zakah?

Generally, if a Muslim has had the nisab for a lunar year, the zakah is due. However, the zakah on agricultural products is due at harvest time. Likewise, the zakah on metals/minerals that are mined is due at the time of extraction.

Many Muslims choose to pay their zakah in Ramadan, for during this month their good deeds receive greater reward than at other times. Many also make Ramadan the end of their fiscal year and keep their financial records according to the Islamic calendar. If records are kept according to the Gregorian calendar, the rate of zakah will be slightly higher to compensate for the extra days in the solar year.

It should be noted that if a Muslim dies before paying the zakah, his or her heirs must pay it before dividing the legacy.

What is Nisab and Rate of Zakah?

Who Can Receive Zakah?

In the Qur’an, Allah says what means: [The alms are only for the poor and the needy, and those who collect them and those whose hearts are to be reconciled, and to free the captives and the debtors, and for the cause of Allah, and (for) the wayfarers; a duty imposed by Allah. Allah is Knower, Wise.] (At-Tawbah 9: 60)

Needy relatives such as brothers, sisters, uncles, aunts, nephews, nieces, etc. can receive the zakah if they are poor and need help. Indeed, giving to them is both an act of charity and of maintaining family ties. The Prophet (peace and blessings be upon him) said, “Charity given to a poor is charity and charity given to a relative is charity and maintaining family ties.” (Reported by Ahmad and An-Nasa’i) However, zakah cannot be given to one’s wife, children, grandchildren, parents and grandparents because it is one’s duty to take care of them first.

One category of zakah recipients is fi sabil lillah (for the cause of Allah), which leaves the Muslim a wider scope to pay the zakah.