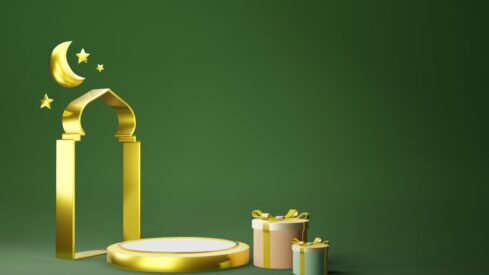 Ramadan is the month of blessings and returning to Allah in repentance. Two months before Ramadan, i.e., in the month of Rajab, the Prophet, peace and blessings of Allah be upon him, used to pray to Allah to make him witness the month of Ramadan. He used to say: “O Allah, bestow Your blessings on us during the months of Rajab and Sha`ban, and make us witness Ramadan.” The Prophet said that out of his deep love and appreciation for the rank of the holy month of Ramadan in the Sight of Allah.

The Prophet, peace and blessing be upon him, used, on seeing the crescent in the beginning of each month, to supplicate Allah, Exalted and Glorified be He. In this concern, according to an authentic Saying, Talha Ibn `Ubaidullah, may Allah be pleased with him, narrated on the authority of his father who quoted his father (Talha’s grandfather) as saying: “The Prophet used to say, on seeing the crescent in the beginning of any month, “O Allah, bestow Your blessings on us during this month, and help us, so that we can remain steadfast in faith. (O crescent,) Allah is my Lord and yours too.”

Due to such great significance of the holy month of Ramadan, one should, during this month, prepare oneself to do one’s best in observing Allah’s teachings; one should return to Allah in true repentance, for Allah says, {And turn unto Allah together, O believers, in order that ye may succeed}. (An-Nur: 31)

In fact, one should return to Allah whenever one commits a sin, but it is, a fortiori, highly rewarding to do so in Ramadan. One should welcome this month intending to give up falling into sins, regretting whatever sin one has committed in the past, and determining not to do it again. One should offer fasting to Allah, trying to exert one’s utmost to do good deeds, so as to be one of those whom Allah would accept, forgive them sins, and release from the Hell in the Day of Judgment.

A poet says about the merit of Ramadan: “Ramadan is the farm where soul-purifying seeds are sown. So water such seeds by good deeds. Bad deeds will cause you loss.’’

The best thing for one to avoid Allah’s punishment on the Day of Judgment is to regret one’s sins, intending to do good deeds and surrendering oneself to Allah in good faith. One should offer fasting and keep vigil in prayer for the Sake of Allah, seeking His rewards and fearing His punishment.

In fact, fasting was made obligatory on Muslims before ordaining Jihad (Striving or Fighting in Allah’s Cause). The wisdom behind fasting is to teach Muslims how to train themselves to be patient and able to resist temptations and desires. In performing fasting, believers abstain from satisfying their appetites and base desires; and in so doing, they let down the Satan and his evil followers.

When a fasting person is insulted or wronged by someone, he holds back his anger saying, “O I am fasting,” as if one reminds oneself that one should be tolerant, for one offers fasting to Allah. If one does so one will be greatly rewarded by Allah. The holy month of Ramadan is the best of all months. It is the month when one should train oneself how to be patient and persistent in combating temptations and desires.

It is the month when all sins are forgiven, and true believers keep vigil offering prayers to Allah, to gain His rewards, resigning themselves heart and soul to Allah. It is the month when gates of mercy are open and evil spirits are chained. The rewards of each good deed during Ramadan are in multifold in comparison to any other month. Moreover, in Ramadan, there is the Night of the Divine Decree, which is better than a thousand months.

Miserable is he who has not been forgiven during this month, due to his negligence of his religious duties. And happy is he who offers fasting to Allah in good faith, as Allah will reward him for the great efforts he has exerted in resisting temptations and desires as well as enduring the pains of hunger and thirst.

It is desirable for Muslims, during this holy month, to have a work program. The steps recommended for this program are as follows:

one should return to Allah in true repentance; to do so, one should give up committing sins, regret having committed them, and resolve never to commit them again;

every true Muslim should do good deeds in good faith; he should never deny others their rights;

a good Muslim should teach himself how to be patient for Allah’s Sake; he should beware not to use his organs of hearing and sight in doing something unlawful, nor should he take to lying or swearing;

one should keep vigil in prayer, humbling oneself before Allah and contemplating the wisdom of creation;

one should be keen on performing obligatory prayers in congregation;

one should be interested in attending the first row in prayer and be there from its beginning;

one should offer regularly the Taraweeh prayer (Ramadan Night Supererogatory Prayer; it’s of 8 Rakahs at least) and the Shaf and Witr prayer (a confirmed traditional act of worship, offered in 3 units;)

it’s recommended for a Muslim, if able, to invite one fasting person or more to have Iftar together;

one should give to charity in this special month; we should remember the poor or needy person every day;

paying visits to sick people, keeping ties of kinship, and attending funerals are all social duties of abundant rewards.

one should be keen on reciting the words the Prophet used to praise Allah with in the early morning and before sunset, bearing in mind to remember Allah every time;

one should adapt to reciting daily three Chapters (Surahs) of the Glorious Qur’an, or at least one Chapter;

it’s important to habituate oneself to offering two voluntary units of prayer each time one performs ablution;

one should attend religious sessions; learning something new about jurisprudence each day.

one should offer Duha Prayer regularly;

it’s important to memorize some verses of the Glorious Qur’an daily;

one should learn by heart one or more Prophetic Sayings every day;

one should read some simplified book on the biography of Prophet Muhammad, peace and blessings be upon him, and another on subjects of belief;

one should call others to believe in Allah, and draw their attention to the obligation of following Allah’s teachings and avoiding wrongdoing;

also in this blessed month, one should be extremely generous;

one should, if able, perform Umrah, for performing Umrah during Ramadan is reckoned (in reward) as performing Hajj in the company of the Prophet himself, peace and blessings be upon him;

on breaking fast, it is desirable for one to supplicate Allah using pithy expressions;

one should seek to mediate between disputing people in an attempt to bring them to reconciliation;

one should support Muslims in their fighting in the Cause of Allah;

one should break fast soon after the sunset, and delay having the pre-dawn meal;

one should obey one’s parents if they are alive, and express gratitude to them, if they are dead, by praying for them and giving to charity in their favor;

one should offer I`tikaf (spiritual retreat or seclusion in the mosque for the purpose of worship) during the last ten nights of Ramadan;

one should perform the prayer of `Eidul Fitr (Lesser Bairam);

and one should be keen on fasting six days of the month of Shawwal (the month following Ramadan).