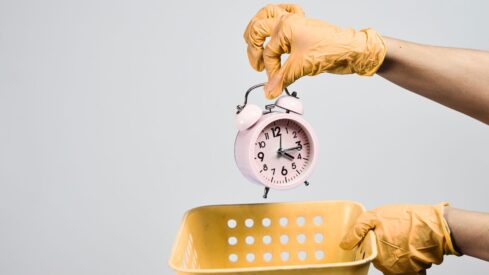 Work is the vocation of the living; idleness is death. Time idly wasted, according to Imam Ibn Al-Qayyim, is even more severe than death: “Wasting time cuts you off from Allah and the hereafter, whereas death cuts you off from worldly life and its people.”

Many are heedless to the gifts of health and leisure. Prophet Muhammad said:

“Two blessings which many people do not appreciate: health and leisure.” (Al-Bukhari)

Many people with healthy bodies and plenty of time wander aimlessly through this life without hope, occupation, or a cause to which to dedicate their life:

{Did you think that We created you in vain (without any purpose), and that to Us you would not be returned? Exalted be Allah, the Sovereign, the Truth.} (Al-Mu’minun 23: 115-16)

Life, earth, and the heavens were created with a true law, which mankind must know and live by in this world, for they will be asked about it tomorrow. The Prophet said:

Man’s self is active all the time. If he does not busy himself with truth, it will busy him with falsehood. If it is not engaged in a fast and constructive motion of good works, efforts, growth, and production, it will be swept away by reckless thoughts and pulled into an eddy of trivialities and nonsense.

“When we are not busy, our minds tend to become a near-vacuum. Every student of physics knows that ‘nature abhors a vacuum.’ The nearest thing to a vacuum that you and I will probably ever see is the inside of an incandescent electric-light bulb. Break that bulb and nature forces air in to fill the theoretically empty space.

Nature also rushes in to fill the vacant mind. With what?

Because emotions of worry, fear, hate, jealousy, and envy are driven by primeval vigor and the dynamic energy of the jungle. Such emotions are so violent that they tend to drive out of our minds all peaceful thoughts and emotions.”

The best way to protect a man’s life and mind is to have a time – and energy- consuming course that leaves no space for evil to steal anything from it. Dale Carnegie said:

“Why does such a simple thing as keeping busy help to drive out anxiety? Because of a law – one of the most fundamental laws ever revealed by psychology. And that law is: that it is utterly impossible for any human mind, no matter how brilliant, to think of more than one thing at any given time.” (How to Stop Worrying, 50)

True, and confirms the verse: {Allah has not made for any man two hearts inside his body.} (Al-Ahzab 33: 4)

Same as the mind cannot think of two separate things at the same time, it cannot be occupied by two contraries.

The distribution of work in Islam throughout the day and life is based on this law, leaving no gaps that may be filled by falsities that are empty of truth.

A whole course summed up in the short yet comprehensive Quranic chapter of Al-‘Asr (Time), where God says:

Continuous loss is inevitable with every moment, as explained by the wise Muslim scholar Al-Hassan Al-Basri: “O Son of Adam, you are no more than a few days. Every day that goes, a portion of you goes.” He imagined every day calling out with every sunrise: “O Son of Adam, I am a new day; I am a witness over your actions. Take advantage of me, for I will never return until the Day of Resurrection.”

Excluded from loss are only those who heed time and grasp the four means of safety, or characteristics for success, as given in the above verses: Faith in God, good deeds, practicing and teaching the truth, and showing and mutual reminding of patience with the hurdles that lie ahead of those adhering to the truth.

Share Share
# Branches of faith # Pillars of Islam # Reflection
Read more in this series: "A New You"