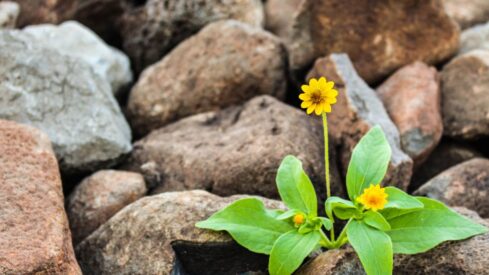 Often, when we want to start a new page in our life, we tie such a wish to some favorable circumstances in the unknown future, a turnabout in our career, or a special date or event. This postponement is accompanied by the belief that power will come to us at that time to invigorate us after a period of indolence and reawaken hope after despair. But this is merely an illusion; renewal of life springs, above all, from within the self.

When life is faced with purpose and insight, there is little danger of succumbing to one’s surrounding circumstances, no matter how bitter they may be.

Rather than being swept along by their currents, one would benefit from them, retaining one’s real self in the face of them, just as flower seeds buried under heaps of earth cleave their way up to the light where they release their refreshing fragrance.

They transform the soil and muddy water into joyful colors and pleasant scents; we can do the same if we take control of our time and preserve our freedom of action while confronting adverse conditions. We are able to fulfill much without waiting for external help.

There is no time to linger. Help is given to those who are walking their way towards the truth, but the power of running or climbing will not be showered on those who are crippled with inaction. That is impossible. Do not hinge the building of your life on some chance that may or may not break forth from the unknown. This will not bring you anything good.

The present days you have in your hands, the soul within you, and the smiling or frowning circumstances around you are the foundations from which your future emerges. Prophet Muhammad (peace be upon him) said:

Every postponement of a life-renewing plan through which you get yourself on the right track only prolongs the dark period you want to deliver yourself from, and keeps you defeated and powerless in front of temptations and carelessness. It can even drag you down a steeper slope, and here lies the calamity.

“The day and night are two mounts. Ride them well to the hereafter. Beware of procrastination (of repentance), for death comes suddenly. Do not be deluded by the Forbearance of Allah; Paradise and Hellfire are closer to you than your shoelace.” (Ibn Ady)

It is important to rearrange your life from time to time, to look critically into its different corners to dig out the defects and failures, and create a short and long-term scheme to eliminate them.

Every few days, you look into the chaos of your desk drawer and tidy up the scattered scraps, messy books, and useless papers. You put everything in its proper place and throw the meaningless things into the trash.

The rooms of your house become messy by the end of the day, and so busy hands go up and down, here and there, to clean the dirty furniture, dump any waste into the bin, and restore everything to order and beauty.

Does our life not deserve such an effort?

Does it not deserve to have its affairs examined from time to time to see if there are any problems that need solving, or any sins weighing it down that need purifying?

It deserves to have its profits and losses considered after every stage forged through this life journey, and to be restored to equilibrium and stability whenever it is shaken by crises or conflicts.

More than any other creature, humans need to delve deeply within and explore themselves in order to protect their private and public lives from disease and disunion. Their moral and mental structure rarely remains intact and concrete with sharp collisions against desires and temptations.

If left to destructive forces, morality and sensibility will inevitably be ruined, like the spilled beads of a necklace whose string has broken.

{…one whose heart We have made heedless of Our Remembrance, one who follows his own lusts and whose affair (deeds) has become broken up.} (Al-Kahf 18: 28)

Hence, continuous work is necessary to organize and accurately monitor oneself.

Before every new morning, God exhorts people to renew their lives with the break of dawn, having rested their bodies after a day’s labor and upon rising from their beds to face a new day. At that decisive time they can think over their stumbles, falls, and sins; at that peaceful time every one of us can renew his life and rebuild himself anew with the shining rays of light, hope, and new beginnings, guided by the “Voice of Truth” calling out everywhere to restore the wandering and revive the weary.

“Our Lord (Blessed and Exalted is He) descends every night to the nearest heaven (to our world), when only the last third of the night remains, and says, ‘Is there any seeker of My Favor that I may give to him? Is there any supplicant that I may answer him? Is there any asker of forgiveness that I may forgive him?’ This continues until the break of dawn.” (Al-Bukhari)

“The nearest a slave can be to his Lord is during the middle of the night.” (At-Tirmidhi)

If you can be among those who remember God during that special time of closeness to Him, be among them. It is the time when night goes and morning comes, and out of the debris of the near or distant past you can rise to build your future.

Do not be discouraged by your countless sins. Even if they are as much as the ocean foam, God will not mind forgiving them all for you as long as you turn to Him repentantly and hurry your steps for His Mercy and Pardon. Past ingratitude should be no barrier to sincere repentance.

{Say: “O My servants who have transgressed against themselves (by sinning), do not despair of Allah’s Mercy. Indeed, Allah forgives all sins. Indeed, it is He Who is Oft-Forgiving, Most Merciful. And return in repentance to your Lord and submit to Him.} (Az-Zumar 39: 53-54)

In a sacred hadith (Revelation from God in the Prophet’s words):

“Allah says: “O son of Adam, as long as you call upon Me and put your hope in Me, I will forgive whatever you have done, and I will not mind.

O son of Adam, even if your sins were to reach the clouds of the sky, then you were to seek My Forgiveness, I would forgive you, and I will not mind.

These and similar Words of God revive hope to a deadened will and stir up a dull and somewhat ashamed person with a determination to resume walking towards God and renew life after a bad, passive past.