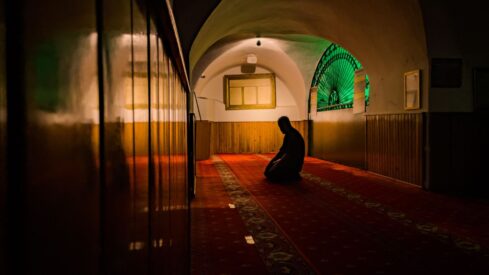 Has any of us ever thought of recording the good and the bad things we do, through which we can from time to time know our balance of good and bad deeds, profits and losses?

Every important deed has a record of inputs and outputs, profits and losses, except man’s life, in which he proceeds vaguely, without caring to know whether it is on the rise or the decline.

If it were left up to people to live randomly and behave as they like without taking heed of a watcher and careful account taker of all things, it would probably have been understandable (although still reckless and foolish) that they squander their lives as spendthrifts squander their money, forget about the past and the self-modifying experiences through which they have passed, and rush into the future fearless of sins and mistakes.

But, the fact is, God has recording angels who write down everything we do, from the tiniest action to the largest. And in the Day of Judgment:

{The record of deeds will be placed (open), and you will see the guilty fearful of that within it, and they will say: ‘Woe to us! What is this book that leaves nothing small or great without recording it?’

And they will find everything they did presented before them. And your Lord treats no one with injustice.} (Al-Kahf 18: 49)

Is it not wise to search our deeds and try to discover our own special record?

Is it not important to estimate the magnitude of the good and the bad we do?

This is what Prophet Muhammad advised:

“The wise one is he who reproaches himself and acts in preparation for what is after death.” (Ahmad)

The Muslim writer, Ibn Al-Muqaffa‘ recommended that people keep a record of their doings, the right page for the good and the left page for the bad.

Likewise, Dale Carnegie recommended keeping a record of the foolish things we have done and criticize ourselves: “I have a folder in my private filing cabinet marked ‘FTD’ – short for ‘Fool Things I Have Done.’ I put in that folder written records of the foolish things I have been guilty of. I sometimes dictate these memos to my secretary, but sometimes they are so personal, so stupid, that I am ashamed to dictate them, so I write them out in longhand.

I can still recall some of the criticisms of Dale Carnegie that I put in my ‘FTD’ folders fifteen years ago. If I had been utterly honest with myself, I would now have a filing cabinet bursting out at the seams with these ‘FTD’ memos. I can truthfully repeat what King Saul said more than twenty centuries ago: ‘I have played the fool and have erred exceedingly.’ When I get out my ‘FTD’ folders and re-read the criticisms I have written of myself, they help me deal with the toughest problem I shall ever face: the management of Dale Carnegie.

I used to blame my troubles on other people; but as I have grown older – and wiser, I hope – I have realized that I myself, in the last analysis, am to blame for almost all my misfortunes.

Lots of people have discovered that, as they grow older. ‘No one but myself,’ said Napoleon at St. Helena, ‘no one but myself can be blamed for my fall. I have been my own greatest enemy – the cause of my own disastrous fate.’” (How to Stop Worrying, 20)

Share Share
# Branches of faith # Pillars of Islam # Good deeds # Reflection
Read more in this series: "A New You"