How to Make `Umrah 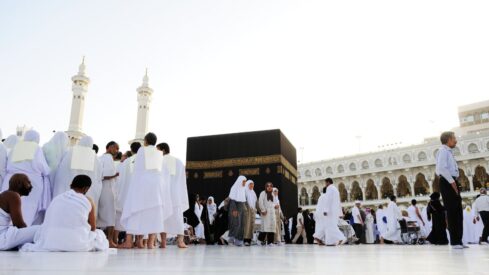 As mentioned in the article “About Hajj and `Umrah”, `Umrah is the lesser pilgrimage. It involves ihram, Tawaf (circumambulating the Ka`bah), Sa`i (walking between mounts of Safa and Marwah), and shaving or cutting the hair.

The first steps in your `Umrah are to put on the clothing of ihram and to make the intention of `Umrah. For more information on ihram and its restrictions, refer to the article “All About Ihram.”

After making the intention of ihram, try to spend your time in remembering Allah, reading the Qur’an, and supplicating. It is recommended also to chant Talbiyah frequently. The words of Talbiyah are:

Male pilgrims are recommended to raise up their voices when repeating the words of Talbiyah. Males and females repeat Talbiyah until they start Tawaf.

The first ritual to perform after arriving in Makkah is Tawaf. There is no problem if you rest before going to Tawaf if you feel tired.

When you reach Makkah, leave your baggage in the hotel or in a safe place, and prepare yourself for Tawaf by performing ghusl (ritual bathing), if possible, or at least wudu’ (ablution). Scholars have two opinions regarding the necessity of purity for Tawaf. Some scholars hold that you must have wudu’ before Tawaf and others deem it unnecessary. The latter opinion is stronger since the Prophet (peace and blessings be upon him) did not ask people accompanying him in his pilgrimage to make wudu’ for Tawaf. According to this opinion, someone who loses wudu’ before or in the middle of Tawaf need not renew it; they can make Tawaf without wudu’. It is up to you to choose either of the opinions.

Menstruating women cannot do Tawaf until they are pure and have performed ghusl.

For men, it is recommended that you drape the upper piece of ihram over your left shoulder only, exposing the right one. This is called idtiba`. It was practiced by the Prophet (peace and blessings be upon him) and his Companions when they made `Umrah in AH 7. At the time, the polytheists claimed that the fever of Madinah weakened Muslims, so the Prophet ordered his Companions to uncover their right shoulders and to jog in the first three rounds to show the polytheists their strength.

On entering the Sacred Mosque (Al-Masjid Al-Haram), it is recommended to say the du`aa’ of entering mosques:

In the name of Allah. O Allah, Bless Muhammad! O Allah! Forgive my sins and open Your doors of mercy for me.

Now you are ready to start Tawaf. Tawaf involves walking around the Ka`bah seven times. Each round starts and ends with the Black Stone, with the Ka`bah being on your left side. If it is possible to reach the Black Stone, kiss it quietly; if it is not, you can touch it and kiss your hand or just face it and point at it saying “Bismillah, Allahu Akbar” (In the name of Allah, Allah is the Greatest). In the first three rounds, males are recommended to jog from the Black Stone to the Yemeni corner, the third of the Ka`bah’s corners and the one preceding the Black Stone.

While doing Tawaf, busy yourself with dhikr (remembrance of Allah) and supplication. You are in a very blessed time and a very blessed place, so do not miss the chance. Pray Allah to forgive your sins, to dispel your worries, to grant you the benefits of the world and the hereafter, and to give you whatever favors you would like. Show humbleness and genuine need to Allah, and ask Him the Almighty for you, your parents, your family, and the whole Muslim Ummah.

When you reach the Yemeni corner try to touch it if possible. If you can’t, you need not point at it or do anything. Supplicate Allah until you reach the Black Stone saying:

Our Lord! Grant us good in this world and good in the hereafter, and save us from the punishment of the Fire.

After finishing Tawaf, pray two rak`ahs behind Maqam Ibrahim (the Station of Ibrahim) or a little bit away from it. Recite Surat Al-Kafirun (Surah 109) in the first rak`ah and Surat Al-Ikhlas (Surah 112) in the second rak`ah.

It is recommended that you drink Zamzam water after you have finished Tawaf and the two-rak`ah prayer.

Be careful of the following things:

Do not crowd to kiss the Black Stone or to touch the Yemeni corner.

Make sure that Hijr Isma`il (the Enclosure of Isma`il – the arch between the north and the west corners of the Ka`bah) is included in your Tawaf. This place is considered part of the Ka`bah and therefore your circumambulation should be outside it.

If you are unable to perform the two-rak`ah prayer after Tawaf at Maqam Ibrahim, you can perform it any place in the mosque. Some people insist on performing it at the Maqam, disturbing the smooth movement of the pilgrims; this is not a proper act.

Note also that what is obligatory in Tawaf is just making the seven rounds, starting and ending with the Black Stone and keeping the Ka`bah on your left side. The supplications mentioned above, kissing the Black Stone or pointing at it, touching the Yemeni corner, praying two rak`ahs after Tawaf, etc. are merely recommended. Your Tawaf is not damaged if you missed any of them.

The next step in your `Umrah is to make Sa`i between As-Safa and Al-Marwah mounts. If you feel tired after performing Tawaf, you can take a break before heading to As-Safa to start Sa`i. Wudu’ is not necessary for Sa`i. When you are ready, do the following steps:

a. Head to As-Safa. When you are about to reach it, recite the following verse:

b. Then say “I start my Sa`i from the place which Allah mentioned first” (that is, As-Safa mentioned in the above verse).

c. Ascend As-Safa. It is easy nowadays to ascend both As-Safa and Al-Marwah; they are paved and covered with marble. In addition, the two mounts are not that high, and you need not climb to their top. You just have to walk back and forth the full distance between these two points. If any part of this distance is left untraversed, the Sa`i will remain incomplete. This requires ascending even a small part of both mounts, but it is recommended that you go up until you are able to see the Ka`bah.

d. Face the Ka`bah and say

There is no god but Allah, Allah is the Greatest.

There is no god but Allah. He has no partners. To Him belong the sovereignty and all praise. He has power over all things.

There is no god but Allah. He has fulfilled His promise, given victory to His servant, and He alone defeated the confederates.

e. Start performing the Sa`i by walking from As-Safa to Al-Marwah. The distance between the two mounts is about 420 meters. If you are a male, it is recommended that you hasten between the two green signs. On reaching Al-Marwah, ascend it, face the Ka`bah, and repeat what you said on As-Safa. You have now completed one of the seven parts of Sa`i.

f. Go back to As-Safa, walking easily. Again, if you are male, hasten on reaching the green sign.

g. Keep on remembering Allah and supplicating Him while going between As-Safa and Al-Marwah.

h. Repeat the same steps in each of the seven parts. Going from As-Safa to Al-Marwah is reckoned as one part, and the return to Al-Safa is another part. Sa`i, therefore, begins with Al-Safa and ends at Al-Marwah.

4. Shaving or Cutting the Hair